See all sections
Learn
Next SectionRotational Dynamics with Two Motions

Practice: A light, long rope is wrapped around a solid disc, in such a way that pulling the rope causes the disc to spin about a fixed axis perpendicular to itself and through its center. The disc has mass 40 kg, radius 2 m, and is initially at rest, and the rope unwinds without slipping. You pull on the rope with a constant 200 N. Use the rotational version of Newton’s Second Law to calculate how fast (in rad/s) the disc be spinning after you pull 50 m of rope.

Practice: A system is made of two small, 3 kg masses attached to the ends of a 5 kg, 4 m long, thin rod, as shown. The system is free to rotate about an axis perpendicular to the rod and through its center. Two forces, both of magnitude F and perpendicular to the rod, are applied as shown below. What must the value of F be to the system from rest to 10 rad/s in exactly 8 complete revolutions? 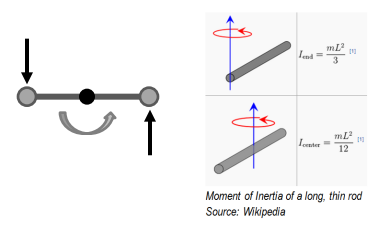 Practice: Two rotating doors, each 6.0 m long, are fixed to the same central axis of rotation, as shown (top view). When you push on one door with a constant 100 N, directed perpendicular from the face of the door and 50 cm from its outer edge, the rotating door system takes 8 s to complete a full revolution from rest. The doors can be modeled as thin rectangles (moments of inertia for thin rectangles, around two different axes, are shown for reference). Calculate the mass of the system. 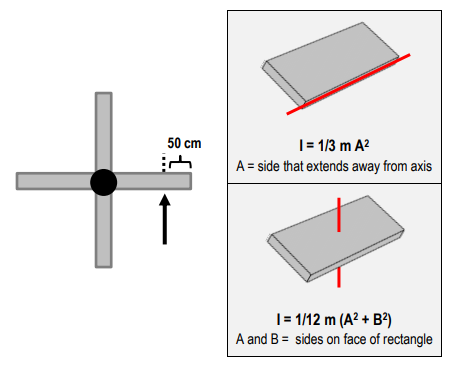 Practice: A 1,000 kg disc that has a 5 m outer radius is mounted on a vertical, inner axle 80 kg in mass and 1 m in radius. A motor acts on the axle to speed up or slow down the system. Suppose the motor stops functioning when the system is spinning at 70 rad/s. To bring it to a complete stop, you apply a constant 200 N friction to the surface of the axle. How many revolutions will the system take to stop? 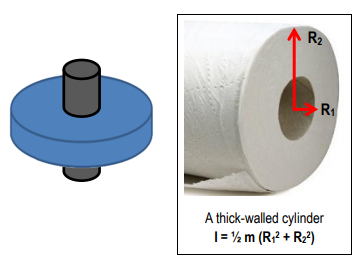 Videos in Torque with Kinematic Equations