Spinning on String of Variable Length

Example #1: Spinning on a string of variable length

Practice: A small object (red, m) is on a smooth table top and attached to a light string that runs through a hole in the table. The other end of the spring attaches to a hanging weight (green, M). When the small object is given some speed, it spins in a circular path around the hole, with the tension from the hanging weight providing the centripetal force that keeps it spinning. If the object spins with angular speed ω when it is a distance R from the central role, what new angular speed (in terms of ω) does it have when this distance is halved? What new mass does the hanging weight need, in terms of M, to support a circular path at the new speed? 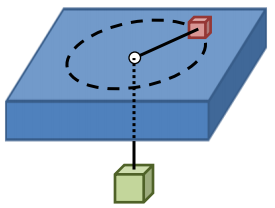 Videos in Spinning on String of Variable Length