Moment of Inertia of Systems

See all sections
Learn
Next SectionConservation of Energy in Rolling Motion

Hey guys. So, let's check out another example of a moment of inertia problem. So, here we have a solid disk. Remember, a solid disk has the same moment of inertia as a solid cylinder, and when I tell you the shape I'm telling you which equation to use for I. So, I of the disk is 1/2 m, r squared, I'm also given that it has a radius of 4. So, R equals 4 and a mass of 10, okay? And then we're going to add two small objects on top of it, the fact that it's saying two small objects and it's not giving you a shape for the object it's an indication that these are going to be treated as point masses, okay? And these are the two objects here. So, I'm going to call this one so this is m1 and this is m2, okay? It says, the object on the left has a mass of two kilograms and it's placed halfway between the disks centers, the center disk is here, in the edge. Now, the distance between the center and the edge is the radius, right? Which is 4, if you are halfway between the center and the edge you, your distance is half the radius, okay? So, this distance here is half the radius. So, I'm going to call this R1 because is the distance for mass 1 and it is 1/2 of the radius, which is 2, and the other guy, the other object is 3 kilograms in mass, 3 kilograms, and it's placed at the edge of the disk. So, if you're all the way at the edge your distance, let's call this R2, is the same as the radius, which is 4, okay? So, I'm giving you all the information need to calculate the system's moment of inertia. Now, system is a combination of the disk with the masses. So, I system is I1 plus I2, right? Object 1 object 2, plus I disk and remember for every one of these you have to determine is this at point mass or is this a shape? Well, one and two are point masses, we talked about this here. So, I'm going to write m1, R1 squared plus m2, R2 squared and the disk is a shape and it has moment of inertia given by 1/2 mr squared, 1/2 Big M big R squared. Now, all we got to do is plug in the numbers very straightforward. So, what I'm going to do is plug the masses the masses are 1, 2 and 10. So, I'm sorry, 2, 3 and 10, 2, 3 and 10. So, I'm going to do 2, 3 plus half of 10R squared, okay? And then all we have to do is plug in the r's, this R here is the radius it's very straightforward, we know that the radius is a four. So, I'm going to put a 4 here.

Practice: You build a wheel out of a thin circular hoop of mass 5 kg and radius 3 m, and two thin rods of mass 2 kg and 6 m in length, as shown below. Calculate the system’s moment of inertia about a central axis, perpendicular to the hoop.

Practice: A composite disc is built from a solid disc and a concentric, thick-walled hoop, as shown below. The inner disc (solid) has mass 4 kg and radius 2 m. The outer disc (thick-walled) has mass 5 kg, inner radius 2 m, and outer radius 3 m. Calculate the moment of inertia of this composite disc about a central axis perpendicular to the discs.

Practice: Three small objects, all of mass 1 kg, are arranged as an equilateral triangle of sides 3 m in length, as shown. The left-most object is on (0m, 0m). Calculate the moment of inertia of the system if it spins about the (a) X axis; (b) Y axis. 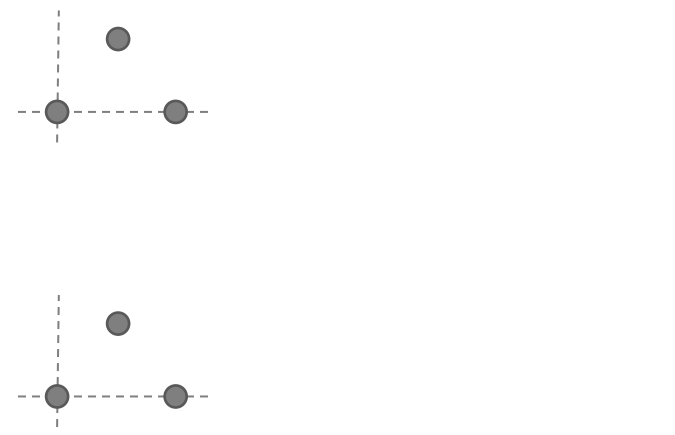 Videos in Moment of Inertia of Systems