The capacitance of a parallel plate capacitor:

k is the dielectric constant of the material between the plates, A is the area, and d is plate separation. 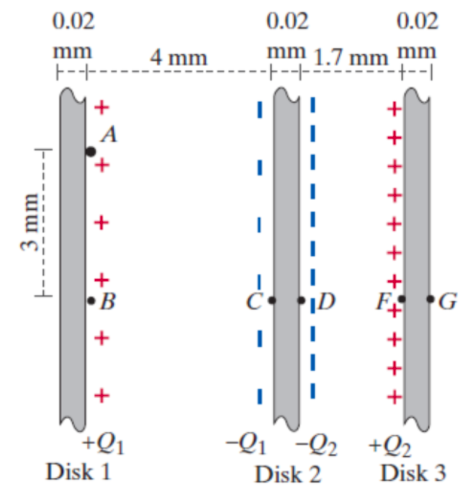 1) What is the magnitude of the electric field in the region between disks 1 and 2?

3) Which of the following statements are true? Choose all that apply.
a. VB - VA =0
b Along a path from A to B

is in the same direction as

is opposite to the direction of

The charged disks have tiny holes which allow a particle to pass through them. An electron which is traveling at a fast speed approaches the plates from the left side. It travels along a path from A to G. Since no external work is done on the system of plates + electron, Δ K + ΔU = Wext = 0 Consider the following states: Initial, electron at location A. Final, electron at location G.

11) What is the change in potential energy of the system?

12) What is the change in kinetic energy of the electron?

Based on our data, we think this problem is relevant for Professor Corbin's class at UCLA.