The magnitude of the velocity remains constant only if:

2. a is perpendicular to v. In this case, only the direction changes. The magnitude remains constant.

For instant 1 and 3, we'll use a tilted coordinate axis.

Each diagram below shows the velocity and acceleration for an object at a certain instant in time.

a. For each instant, state whether the object is speeding up, slowing down, or neither (e.g. moving with constant speed). Base your answers on what you have done in tutorial and problem 1. 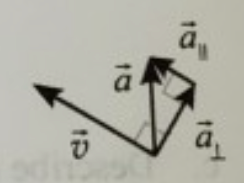 For each of the other instants, draw a diagram similar to the one given for instant l. Label the parallel and perpendicular components of the acceleration relative to the velocity. If either component is zero, state so explicitly.

Based on our data, we think this problem is relevant for Professor Kozliak's class at University of North Dakota.