In this problem, we are required to apply the techniques necessary in determining the acceleration of an object.

Whenever you face a problem involving forces, always start with a free-body diagram.

To draw a free-body diagram use the following steps:

In most problems, after you have drawn the free-body diagrams, you will explicitly label your coordinate axes and directions. Always make the object of interest the origin of your coordinate system. Then you will need to divide the forces into x and y components, sum the x and y forces, and apply Newton's first or second law.

In this problem, you will only draw the free-body diagram.

Suppose that you are asked to solve the following problem: 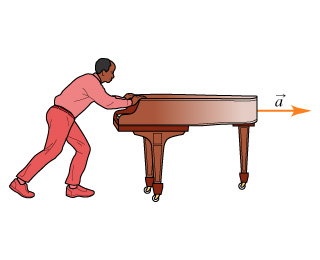 Chadwick is pushing a piano across a level floor (see the figure). (Figure 1) The piano can slide across the floor without friction. If Chadwick applies a horizontal force to the piano, what is the piano's acceleration?

To solve this problem you should start by drawing a free-body diagram.

a.) Determine the object of interest for the situation described in the problem introduction.

b.)Identify the forces acting on the object of interest. From the list below, select the forces that act on the piano.Check all that apply.

Learn this topic by watchingIntro to Forces + Newton's Laws Concept Videos
All Physics Practice Problems Intro to Forces + Newton's Laws Practice Problems
Q.If a block is moving to the left at a constant velocity, what can one conclude?a. There is exactly one force applied to the block.b. The net force app...
Q.Which of the following statements is not one of Newton’s laws of motion?(a) What goes up must come down.(b) The rate of change of momentum of an objec...
Q.A box of mass m hangs by a string from the ceiling of an elevator that is accelerating upward.1) Which of the following best describes the tension T i...
Q.To understand the meaning and the basic applications of Newton's 1st and 2nd laws. In this problem, you are given a diagram (Figure 1) representing th...
See all problems in Intro to Forces + Newton's Laws