The electric force from Coulomb's law:

, where k is Coulomb's constant and r is the distance between two charges q1 and q2.

The net electric force is expressed as:

, where Fx and Fy are the x and y components of electric force.

The force F1 due to charge q1 on charge q2 is given by: 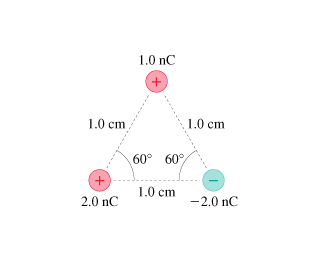 A) Determine the magnitude of the force F.

B) Determine the direction of the force F.