The mass and charge on the particles cause differences in the paths followed. 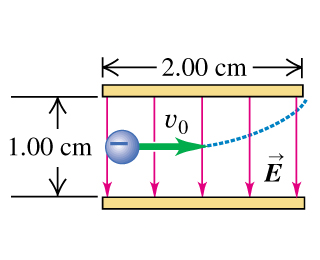 The electron just misses the upper plate as it emerges from the field. Suppose that in the figure, the electron is replaced by a proton with the same initial speed.

Compare the paths traveled by the electron and the proton and explain the differences.