Problem: An atom of mass M is initially at rest, in its ground state. A moving (nonrelativistic) electron of mass me collides with the atom. The atom+electron system can exist in an excited state in which the electron is absorbed into the atom. The excited state has an extra, "internal," energy E relative to the atom's ground state. (Figure 1)What is the least possible initial kinetic energy Kmin the oxygen atom could have and still excite the cesium atom?

🤓 Based on our data, we think this question is relevant for Professor Tu's class at WESLEYAN.

Considering that the collision is completely inelastic, the least possible kinetic energy of electron can be expressed as: 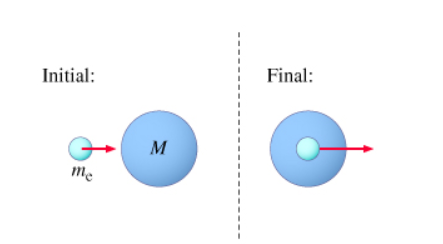 What is the least possible initial kinetic energy Kmin the oxygen atom could have and still excite the cesium atom?

Learn this topic by watchingInelastic Collisions Concept Videos
All Physics Practice Problems Inelastic Collisions Practice Problems
Q.An iron block with mass mB slides down a frictionless hill of height H. At the base of the hill, it collides with and sticks to a magnet with mass mM....
Q.In this problem we will consider a collision of two moving objects such that after the collision, the objects stick together and travel off as a singl...
Q.Most geologists believe that the dinosaurs became extinct 65 million years ago when a large comet or asteroid struck the earth, throwing up so much du...
Q.Blocks A and B are moving toward each other on a horizontal frictionless surface. Block A has mass 5.0 kg and is moving to the right with speed 8.0 m/...
See all problems in Inelastic Collisions

Based on our data, we think this problem is relevant for Professor Tu's class at WESLEYAN.