The slope of the graph gives the velocity.

The two cars pass each other when their graphs coincide.

Two cars traveling on the parallel lanes of a two-lane road. The cars' motions are represented by the position versus time graph shown in the figure. 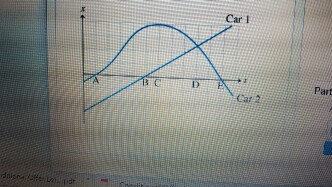 Answer the questions using the times from the graph indicated by letters.

A. At which of the times do the two cars pass each other?

B. At which of the lettered times, if any. does car #1 momentarily stop?

C. At which of the lettered times, if any, does car #2 momentarily stop?

D. At which of the lettered times are the cars moving with nearly identical velocity?