The motion of block 2 is contributed to by the sum of forces in the y-direction.

The equation for the sum of the forces in the y-direction, for block two is ΣFy = m2g-T.

For block 1, the forces are in the x-direction. 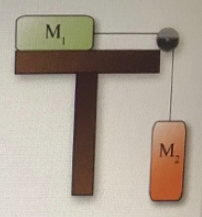 A. Using the variable T to represent tention, write an equation for the sum of the forces in the y-direction, for block two.

B. Using the variable T to represent tension, write an expression for the sum of the forces in the x-direction for block 1.

D. Write an expression using the variable provided for the magnitude of the tension force T.

E. What is the tension, T, in newtons?

Based on our data, we think this problem is relevant for Professor Maharjan's class at BROOKLYN CUNY.