Problem: A square loop of wire with side length a carries a current I1. The center of the loop is located a distance d from an infinite wire carrying a current I2. The infinite wire and loop are in the same plane; two sides of the square loop are parallel to the wire and two are perpendicular as shown.Part A. What is the magnitude, F, of the net force on the loop? Express the force in terms of I1, I2, a, d, and μ0.Part B. The magnetic moment m→ of a current loop is defined as the vector whose magnitude equals the area of the loop times the magnitude of the current flowing in it (m = IA), and whose direction is perpendicular to the plane in which the current flows. Find the magnitude, F, of the force, F, of the force on the loop from Part A in terms of the magnitude of its magnetic moment. Express F in terms of m, I2, a, d, and μ0.

The force in the loop is obtained by summing up the forces produced by the two parallel wires in the loop.

The force on the left side of the loop is given by:

Force on the right side of the loop: 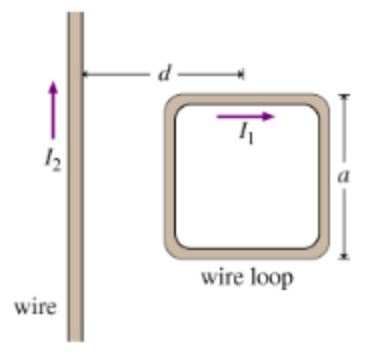 Learn this topic by watchingMagnetic Force Between Parallel Currents Concept Videos
All Physics Practice Problems Magnetic Force Between Parallel Currents Practice Problems
Q.Assume that in (Figure 1) I = 12A and d = 42cm .What is the magnitude of the force on the first wire?
Q.Two high-current transmission lines carry current of I1 = 1.23 A and I2 = 2.32 A in the same direction and are suspended parallel to each other with a...
Q.Two wires are separated by d and carry currents I1 and I2, respectively. However, we don't know yet the direction of the current I1 and I2. What we kn...
Q.A loose spiral spring carrying no current is hung from a ceiling . When a switch is thrown so that a current exists in the spring, how do the coils mo...
See all problems in Magnetic Force Between Parallel Currents

Based on our data, we think this problem is relevant for Professor Zhabinskaya's class at UCD.