The electric field is moving from positive to negative. A negatively charged electron moves in the opposite direction to the field.

An electron is released from rest at point B (as shown to the right), where the potential is 0 V. Afterward, the electron: 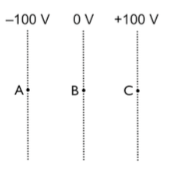 a. remains at rest at B.

b. moves toward A with a steady speed.

c. moves toward A with an increasing speed.

d. moves toward C with a steady speed.

e. moves toward C with an increasing speed.