An object moves along the x axis during four separate trials. Graphs of position versus time for each trial are shown in the figure. 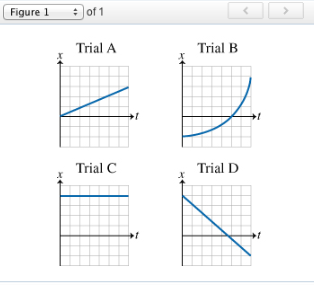 a) During which trial or trials is the object's velocity not constant?

b) During which trial or trials is the magnitude of the average velocity the largest?

Based on our data, we think this problem is relevant for Professor Maxwell's class at UCF.