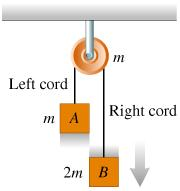 A. The acceleration of the blocks is zero

B. The net torque on the pulley is zero

C. The angular acceleration of the pulley is non-zero

Based on our data, we think this problem is relevant for Professor Evrard's class at UMICH.