The resultant vector, Δv, from vectors, vG and vH is,

1. An object moves clockwise with decreasing speed around an oval track. The velocity vectors at points G and H are shown.

a. In the space at right, copy the velocity vectors

. From these vectors, determine the change in velocity vector,

b. If point H were chosen to lie closer to point G, describe how

would change (direction and magnitude). 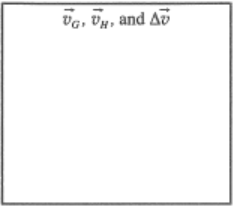 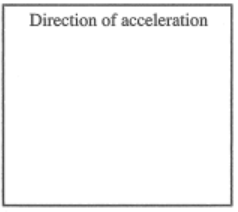 (placed "tail-to-tail") in the space at right. How does the angle between the acceleration and velocity vectors compare to 90°? (i.e., Is the angle greater than, less than, or equal to 90°?) 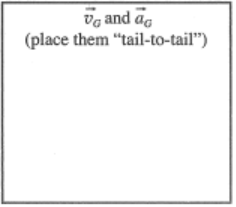 e. Generalize your results above and from tutorial to answer the following question:

For an object moving along a curved trajectory, how does the angle between the acceleration and velocity vectors compare to 90° if the object moves with (i) constant speed, (ii) increasing speed, and (in) decreasing speed?

Based on our data, we think this problem is relevant for Professor Dubson's class at UCB.