a) The free-body diagram for system A: 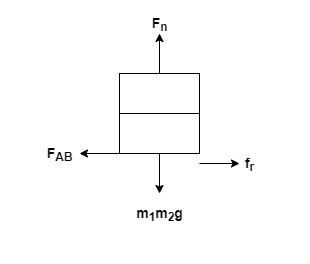 A hand pushes three identical bricks as shown. The bricks are moving to the left and speeding up. System A consists of two bricks stacked together. System B consists of a single brick. System C consists of all three bricks. There is friction between the bricks and the table.

a) Draw and label separate free-body diagrams for systems A and B. 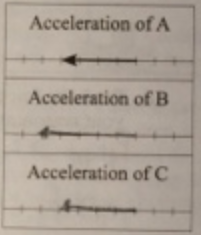 c) The vector representing the net force on system A is shown below. Draw the net force vectors for systems B and C using the same scale. Explain. 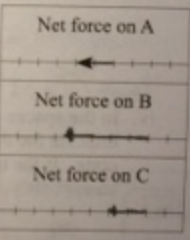 d) The vector representing the frictional force on system A is shown below. Draw the remaining force vectors using the same scale.

Explain how you knew to draw the force vectors as you did.

Learn this topic by watchingIntro to Forces + Newton's Laws Concept Videos
All Physics Practice Problems Intro to Forces + Newton's Laws Practice Problems
Q.An apple weighs 1 N. When the apple is held at rest above your head, the net force on the apple is A) 0.N.B) 9.8 N.C) 1 N.D) 0.1 N.E) none of the abov...
Q.The systems shown below are in equilibrium. If the spring scales are calibrated in newtons, what do they read? Ignore the masses of the pulleys and st...
Q.Two boxes are connected to each other by a string as shown in the figure. The 10-N box slides without friction on the horizontal table surface. The pu...
Q.Two objects with masses of 3.00 kg and 5.00 kg are connected by a light string that passes over a frictionless pulley as in the figure below.Determine...
Q.A chain is suspended by a rope as shown at right. The chain is composed of four identical links and does not move. A. In the spaces below, draw a free...
Q.Which best explains parallel forces? check all that apply.(a) left and right forces that can be added together(b) right and upward forces that cancel ...
Q.A 10-kg block is pushed across a friction-free horizontal surface with a horizontal force of 20 N. The acceleration of the block is?A) 1 m/s2B) 2 m/s2...
Q.Assume the elevator is moving upward at increasing speed. Rank the magnitude of the forces.Rank from largest to smallest. To rank items as equivalent,...
Q.A window washer pulls herself upward using the bucket-pulley apparatus shown in the figure.The mass of the person plus the bucket is 61 kg. (a) How ha...
Q.Weight is actually just a one-word nickname for the force of gravity acting on an object. Many physics educators don't like the term since it can conf...
Q.Your car is skidding to a stop from a high speed. Part A Identify all forces acting on the object.Check all that apply.Weight,  wTension, TKinetic fri...
Q.A) An object cannot remain at rest unless which of the following holds?a) The net force acting on it is zero.b) The net force acting on it is constant...
Q.A 6 kg bucket of water is being pulled straight up by a string at a constant speed.(a) What is the tension on the string?(b) At a certain point, the s...
Q.A book weighing 5 N rests on top of a table.1. A downward force of magnitude 5 N is exerted on the book by the force ofA. the tableB. gravityC. inerti...
See all problems in Intro to Forces + Newton's Laws

Based on our data, we think this problem is relevant for Professor Dubson's class at UCB.