(a) The cars coincide at point D.

Two cars travel on the parallel lanes of a two-lane road. The cars' motions are represented by the position versus time graph shown in the figure. Answer the questions using the times from the graph indicated by letters. 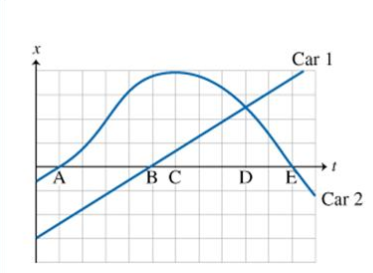 (a) At which of the times do the two cars pass each other?

(b) Are the two cars traveling in the same direction when they pass each other?

(c) At which of the lettered times, if any, does car #1 momentarily stop?

(d) At which of the lettered times, if any, does car #2 momentarily stop?

(e) At which of the lettered times are the cars moving with nearly identical velocity?

Learn this topic by watchingPosition-Time Graphs & Velocity Concept Videos
All Physics Practice Problems Position-Time Graphs & Velocity Practice Problems
Q.Questions go with graph:1.  Its speed at point 1 is less than the speed at point 4. true or false?2. Where is its x-component of velocity zero for onl...
Q.The object maintains a zero velocity A. for 1 second. B. for more than a second. C. for less than a second but more than an instant. D. only for an in...
Q.(Figure 1) shows a history graph at x = 0 cm of a wave moving to the left at 1 cm/s.What is the snapshot graph of this wave at t = 1 s?
Q.Find the object's speeds v1, v2, and v3 at times t1 = 2.0 s, t2 = 4.0 s, and t3 = 13 s. Express your answers in meters per second to two significant f...
Q.What is the x-component of the velocity (in m/s) for the object having the x(t) graph shown above?
See all problems in Position-Time Graphs & Velocity

Based on our data, we think this problem is relevant for Professor Berland's class at EMORY.