🤓 Based on our data, we think this question is relevant for Professor Velissaris' class at UCF.

Net displacement is from O to E

The bacterium E. coli is a single-cell organism that lives in the gut of healthy animals, including humans. When grown in a uniform medium in the laboratory, these bacteria swim along zigzag paths at a constant speed of 25 μm/s. The following figure shows the trajectory of an E. coli as it moves from point A to point E. 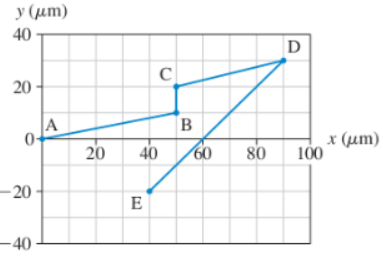 What is the magnitude of the bacterium's average velocity for the entire trip?

Express your answer to two significant figures and include the appropriate units.

What is the direction of the bacterium's average velocity for the entire trip?

All Physics Practice Problems Motion in 2D Practice Problems
Q.The bacterium Escherichia coli (or E. coli) is a single- celled organism that lives in the gut of healthy humans and animals. When grown in a uniform ...
Q.A rocket-powered hockey puck moves on a horizontal frictionless table. The figure below shows the graphs of vx and vy, the x- and y-components of the ...
See all problems in Motion in 2D

Based on our data, we think this problem is relevant for Professor Velissaris' class at UCF.