A particle moves along the x-axis while acted on by a single conservative force parallel to the x-axis. The force corresponds to the potential-energy function graphed in the figure 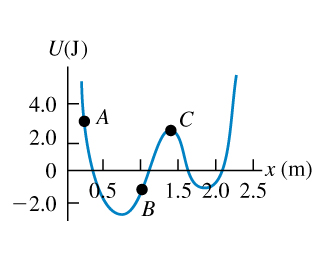 . The particle is released from rest at point exttip{A}{A}.

What is the direction of the force on the particle when it is at point exttip{A}{A}?

At what value of exttip{x}{x} is the kinetic energy of the particle a maximum?

What is the force on the particle when it is at point C?

What is the largest value of exttip{x}{x} reached by the particle during its motion?

What value or values of exttip{x}{x} correspond to points of stable equilibrium?

Learn this topic by watchingForce & Potential Energy Concept Videos
All Physics Practice Problems Force & Potential Energy Practice Problems
Q.A certain spring is found not to obey Hookes law; it exerts a restoring force Fx(x)= - x- x2 if it is stretched or compressed, where = 60.0 N/m and = ...
Q.An object moving in the xy-plane is acted on by a conservative force described by the potential-energy function U(x, y)= (1 / x2+1 / y2), where alpha ...
Q.A small block with mass 0.0400 kg is moving in the xy-plane. The net force on the block is described by the potential- energy function U(x,y)= (5.80 ...
Q.A marble moves along the x-axis. The potential-energy function is shown in the figure .At which of the labeled x-coordinates is the force on the marbl...
See all problems in Force & Potential Energy