A small rock with mass 0.22 kg is released from rest at point exttip{A}{A}, which is at the top edge of a large, hemispherical bowl with radius exttip{R}{R} = 0.52 m (the figure 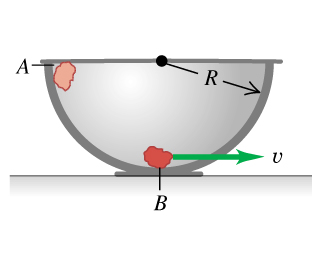 Between points exttip{A}{A} and exttip{B}{B}, how much work is done on the rock by the normal force?

What is the speed of the rock as it reaches point exttip{B}{B}?

Of the three forces acting on the rock as it slides down the bowl, which (if any) are constant and which are not? Explain.

Just as the rock reaches point exttip{B}{B}, what is the normal force on it due to the bottom of the bowl?

Between points exttip{A}{A} and exttip{B}{B}, how much work is done on the rock by gravity?

Learn this topic by watchingEnergy with Non-Conservative Forces Concept Videos
All Physics Practice Problems Energy with Non-Conservative Forces Practice Problems
Q.Mechanical energy is conserved in the presence of which of the following types of forces? Select all that apply.a) frictionalb) magneticc) electrostat...
Q.In an auto accident, a car hit a pedestrian and the driver then slammed on the brakes to stop the car. During the subsequent trial, the drivers lawyer...
Q.A 11.0 kg box is pulled by a horizontal wire in a circle on a rough horizontal surface for which the coefficient of kinetic friction is 0.300.(a) Calc...
Q.A baggage handler throws a 15 kg suitcase along the floor of an airplane luggage compartment with a speed of 1.2 m/s. The suitcase slides 2.1 m ...
See all problems in Energy with Non-Conservative Forces