Ch 21: Heat and TemperatureWorksheetSee all chapters

Hey guys, in this video we're going to talk about phase diagrams. Let's get to it. The phase of a substance depends upon two things, it depends upon the pressure and it depends upon the temperature. If you plot pressure against temperature as shown in this figure, you get a phase diagram. Which is a visual representation of all possible phases and under what conditions they occur. The diagram for water is what I showed here. So water exists in three possible phases just like most substances do. A solid, a liquid and a gas. Here we have the region where the solid lives. Here we have the region where the gas lives. And here we have the region where the liquid lives. I didn't draw outside of these dashed lines marked by the critical point for a specific reason and I'll get to in a second but all that it takes to know what phase water is in is to look at this diagram, point to the pressure that you're at and the temperature that you're at and see what phase you're in. So if you had this pressure right here and you had this temperature right here and you drew an intersection between the two, you would see that your water is in the liquid phase right now. Pressure and temperature, all that determine the phase of the substance. There are two important points on a phase diagram to know, the triple point which I indicated here and the critical point. Not all phase diagrams have a triple point, but water does. In all phase diagrams should have a critical point. The triple point is a certain pressure and volume I indicated it as PT and TT, the T for triple, at which all three phases co-exist. So water at this particular pressure and this particular temperature exists in a state where all three phases are constantly phasing in and out, it's switching between the three. All three phases are co-existing. The critical point is a point on the liquid gas boundary right which is this boundary right here the divider between the liquid and the gas phase past which your substance can no longer be a liquid or a gas. The substance exists as a supercritical fluid. This is another one of those phases that we're not going to cover in introductory physics like plasmas and Bose-Einstein condensates but a supercritical fluid exists something like both a gas and a liquid. It's properties of each of them but the substance can only exist as a liquid and a gas as long as it's within this boundary created by the critical point that's why I filled in the liquid only for this area and the gas only for this area because everything else all of this is a super critical fluid. Everything past that boundary alright. There are no critical points for the solid-liquid boundary so this boundary continues to go on forever. So at low temperatures, a substance can exist at a solid for any pressure but at high temperatures even at temperatures lower than the critical temperature, there are there is a limit to the pressure that you can go and stay as a gas or a liquid state as a contemporary fluid. Now water has a unique phase diagram in the sense that the solid-liquid boundary, this boundary, has a negative slope. Let me show you really quickly this again. You see of a solid liquid boundary is going this way? That means it has a negative slope. Typically substances solid liquid boundary which I indicated here are going to have positive slopes, slopes that go in this direction. The phase diagram shown to the right is a much more common phase diagram. Still the solid liquid boundary goes on forever, still in this one at least there's a triple point and still on the liquid gas boundary there is a critical point past which only the supercritical fluid exists. Alright let's do a quick example. According to the phase diagram below, which phases can the substance exist at under atmosphere pressure? Atmospheric pressure is 1 times 10 to the 5 Pascals. So this is 10 to the 5 Pascals, here is 1 so if I were to just draw a line straight across for any temperature. What phases could this substance exist at? It could exist as a solid, or it could exist as a gas but it could not exist as a liquid right because the pressure is too low for it to exist in the liquid phase and this temperature right here is the sublimation temperature, the temperature at which solid transitions into gas. So this for all we know could be a phase diagram for carbon dioxide because carbon dioxide we know at atmosphere pressure right which is what this is, we know it cannot exist as a liquid it can only exist as a solid and a gas and it sublimates between the two not at 20 Kelvin, higher temperature than that but still a very very cold temperature. Alright that wraps up our discussion on phase diagrams. Thanks for watching guys.

Practice: A phase diagram for an unknown substance, X, is shown below. Using this diagram, answer the following questions. 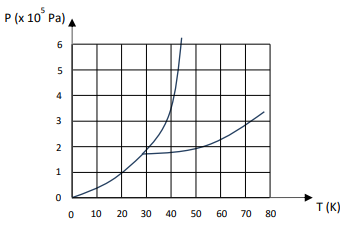