Hey guys! Let's check out this conservation of angular momentum example. You stand on a stool that is free to rotate about a perpendicular axis to itself and through its center. There's a stool. This thing can rotate around itself about an axis perpendicular to it through its center. Imagine that the stool is this and it rotates and you're on top of it. Perpendicular means it makes 90 degrees. This means that the stool rotates like this with an axis through its center, so just like a normal stool if you aren't on it. You stand on the stool and it says that suppose that your combined moment of inertia, you and stool is 8, and that it is the same whether you have your arms open or pressed around your body. That's not true obviously because if you close your arms, remember moment of inertia is some version of mr^2. If you close your arms, your r is going to drop which means your I drops. But in this problem just to make things simpler, we're saying that this change is negligible. When you close, it's going to stay the same, so that's not going to happen. Initially with arms open or closed, your I will be 8. Let me draw this here, you with your arms open, I = 8. Then you with your arms closed over here something like this, close against your body, your I will be 8 as well. Then it says here that you stand on the stool with arms wide open holding 110-kilogram weight on each hand at a distance of 80 centimeters from the central axis. If you're on top of the stool, you're going to rotate around yourself so the central axis imagine is a line through your body. The central axis looks like this. What we're actually going to have is we're going to draw this one more time, weÕre gonna have one last time you holding weights with your arms wide open. Here are the weights you're holding. They have mass of 10. The I of the system is not going to be 8. The I of the system is going to be the I of you plus these two weights. Both weights have to same mass. They are the same distance from the axis which is 0.8 and 0.8 meters and these guys are 10 kilograms each. The moment of inertia of the system is you plus two times the moment of inertia of the little masses because they're going to be the same moments of inertia. Your moment of inertia is 8 but you'd have to calculate this piece here. ThatÕs what we want to find out first. We wanna calculate the system's total moment of inertia about its central axis. I already have that it's 8 + 2I. I is the moment of inertia of the little objects. The objects are point masses because they're shapeless, they have negligible size. The moment of inertia of a point mass remember is mr^2, so this is going to be 2mr^2. The mass is 10 and the distance is 0.8. When you do all of this, you get that the I of the system is 20.8 kg*m^2. This is Part A.

For Part B, it says suppose the system spins with 60 rpm. We want to calculate the angular momentum that you have. I calculated I and now for Part B, we want to find what is L of the system if it has an RPM of 60. Remember, L is I w. I just found the I, I just have to plug in w. I don't have w, I have rpm but I can replace. I can write I and instead of w I'm going to write 2¹ rpm/60. Rpm is 60, so this whole thing just becomes 1 and I end up with L = 20.8*2¹. This is going to be 131. Units is in kg*m^2 / s. That's L, very straightforward. Just plug and play. For Part C, it says you bring the weights to your chest so that they lie on the axis of rotation. The weights are out here, the axis of rotation itÕs like an imaginary line through the middle of your body so you're putting the weights on the axis of rotation like this. It says calculate the system's new moment of inertia. Now what you have is not this picture. Instead what you have is a situation where your arms are actually closed. I'm going to draw this one last time. You have a situation where your arms are closed so something like this. It doesn't look awesome but that's what we're going to roll with. You are holding these weights like this. Remember, if you change the way your arms are set up, it didn't affect your moment of inertia but it will affect the moment of inertia of the weights because the moment of inertia of the weights depend on mr^2 where r is the distance from the axis and that's changing. I used to have a distance of 0.8 from the axis and now the distance to the axis is 0. It's zero. The new moment of inertia, I system new or final I guess if this one is initial is going to be T you + 2I or 8 + 2mr^2. But the r, this is a 10 the mass, the r is becoming a 0 so this whole thing is gone and the only I you have is your I which is 8. That's it for that piece.

The last part we're going to know we're going to ask, if we do this, how fast is it going to spin in terms of rpm? What is my RPM final? When my I was 20.8, we had an RPM of 60 and then when my I final is 8 instead of 20.8, what is the new rpm? I can use conservation of angular momentum to solve this. Li = Lf, so LÕs don't change. I can expand L into I w initial and final. Remember here I have this in terms of w but I want it in terms of rpm. Remember, w is 2¹ rpm/60. You can just replace this here, I initial 2¹ rpm/60 initial = I final 2¹ rpm final / 60. Then what you can do is you can cancel out the 2¹Õs and you can cancel out the 60Õs and you're going to be able to use this to solve for your final rpm. Let's just plug it in. rpm final is I initial which was 20.8 times rpm initial which is 60 divided by I final which goes to the bottom over here, which is 8. If you do this whole thing, you get 156 rpm. Your rpm is 156 and that should make sense. You close your arms, you spin faster. Your I is dropping by a factor of roughly 2.5 so your RPM is going to increase by a factor of roughly 2.5. That's it for this one. This question we had four steps. I walked you through every single step which you might see in a question like this is something much more straightforward where I give you the set up and I just say hey if the RPM initial is 60, what is the RPM final and then you're going to have to figure out that you have to calculate I initial and then you have to calculate I final. Here I kind of held your hand through it and I did it in the multiple steps. But some questions you have to do all of this stuff before you get to the final answer. It may only ask you for the final answer so you have to work your way there yourself all. That's it for this one. Let me know if you have any questions and let's keep going.

Practice: You stand on a stool that is free to rotate about an axis perpendicular to itself and through its center. The stool’s moment of inertia around its central axis is 1.50 kg m2 . Suppose you can model your body as a vertical solid cylinder (height = 1.80 m, radius = 20 cm, mass = 80 kg) with two horizontal thin rods as your arms (each: length = 80 cm, mass = 3 kg) that rotate at their ends, about the same axis, as shown. Suppose that your arms’ contribution to the total moment of inertia is negligible if you have them pressed against your body, but significant if you have them wide open. If you initially spin at 5 rad/s with your arms against your body, how fast will you spin once you stretch them wide open? (Note: The system has 4 objects (stool + body + 2 arms), but initially only stool + body contribute to its moment of inertia) 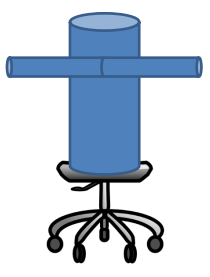