This section deals with the basics of quantum mechanics. Don’t worry too much about it, but this is some good general information.

Definition of an Atomic Orbital 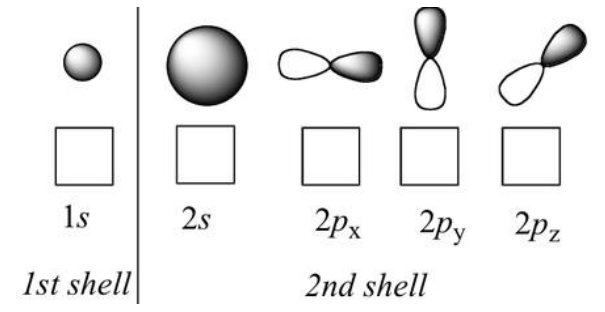 These funny orbital shapes represent the 3-D plots of the equations that describe the probability of finding electrons at any given place as their energy states increase.

Concept #1: The probability of finding electrons in a given place.

Instead of colliding into each other, wave functions have the ability to interfere with each other upon meeting.

The type of interference determines if a new bond will be created between the two orbitals.

Let's keep going so now let's talk about one more thing in terms of quantum mechanics and that is what I was hinting to earlier with the fact that these particles don't just act as particles they don't just bump into each other they act more like waves into a sort of certain extent so as waves they have the ability to interfere with each other so let's write in that word interfere, and what that means is that instead of colliding they actually may interfere constructively or destructively so what does that mean? Well think about it like this instead of thinking about these two orbitals are like balls and like they will hit each other and bounce off each other no that's not how they act at all instead think of these orbitals as waves as regions of waves and once these orbital overlap with each other they can either amplify each other or they can basically cancel each other out, you could also think about it for example a pool of water I make two different splashes in two different places some of the winds are going to come together and make bigger waves, right? But also, some other waves are going to come together and actually cancel each other out, maybe you've noticed that that there will be some regions that are really big waves and some regions that have like not that many waves, OK? That's the difference between constructive and destructive interference so I have constructive interference the waves come together and they make waves of greater amplitude, alright? With destructive interference that means that these Orbitals come together but they wind up canceling each other out in some way and actually making no net wave at the end now what do these waves represent? I know you like thinking where is Johnny going with this? Well when you increase the amplitude of your wave what you're doing is you're increasing the chances of finding an electron in a certain place, OK? So, notice that I have this region of overlap right here, OK? That is between the two. When I have constructive interference, what that means is that now the chances of finding electrons in this space right here are higher, OK? When I have destructive interference then what that means is that the chances of finding electrons in the middle are lowered, OK? And that's what I've drawn here at the top and the bottom when they constructively interfere that's what we call a bonding molecular orbital and that's the whole idea behind the chemical bond, a chemical bond isn't just some random stick floating out in space what it is is that there's a higher mathematical probability of finding electrons in this region right here, OK? And that's what we call a bond so anytime you think of bond now think that's where electrons are at a higher likelihood of them being, OK? Now the opposite is true when they destructively interfere, when they destructively interfere that's called an anti-bonding orbital because what happens is that the chances of finding electrons in the middle actually goes straight to 0, remember that I said that psi squared is the orbital or the relative probability so basically what we're saying is that there is no relative probability of finding electrons right in between there, by the way just so you guys know any area that has a probability of 0 is called a node, OK? And that's something random that you might need to know just some.... Whatever you get what I'm saying it's some terminology that you guys need to know.

Concept #1: The probability of finding electrons in a given ...
Concept #2: Constructive vs. destructive interference.
Previous SectionAtomic Structure
Next SectionMolecular Orbitals