Here is the best flowchart you’ll ever learn in your life. Seriously.

Professors rarely tell you which mechanisms to use. Instead, they’ll give you a set of reagents and ask you to figure it out yourself. This flowchart basically explains that entire process. Let’s go!

When do you use this flowchart? Whenever you have a nucleophile and a GOOD leaving group.

Concept #1: Overview of the flowchart.

So, guys, we have a big problem. I've taught you guys all about SN1, SN2, E1, E2 and I taught you about all the different conditions that are favored for each one. And in some cases, it's kind of obvious what mechanism we would use. But there are a lot of cases where it's going to be kind of blurry and you're going to be wondering is it going to be SN2, is it going to be E2.
I remember having this problem as a private tutor back many years ago when I just used to do private tutoring and trying to put myself and my thinking into my student's head and trying to tell them, “Guys, it's just this. It's just obviously the nucleophile, whatever.” And what I realized is that it wasn't getting through. I needed some method or some way to just give my brain to someone else so that they would be able to see what kind of mechanism we're using because many times – sometimes we're going to have to ask ourselves up to four different questions to determine what mechanism to use.
That is when I decided to make a solution and lo and behold I'm going to introduce you guys to one of the best parts of this whole chapter which is this awesome Johnny-patented flow chart called the Big Daddy flow chart. And it's just going to change your life. So are you guys excited? Ready to get going?
Like I said, this is such a great flow chart. I've even had students that have already taken their MCAT in med school tell me, “Johnny, the Big Daddy flow chart still saves my life.” So I'm like wow, it must be pretty good.
So now I've just hyped it up a crazy amount. Hopefully, you guys like it. Let's go ahead and get started.
As you guys can see it's very complicated. It's very big. But it's actually pretty easy to use. The way that we're going to use this is like a series of questions that you ask yourself. We're just going to ask ourselves, self, is this whatever and then you say yes or no and then you keep going down the flow chart until you get to the mechanism that you need.
All right? So what's the most important question? It's actually the same question that we were asking when I was teaching you about the mechanisms at the beginning which is what kind of nucleophile do I have. Is it strong or is it weak? The way we determine that is by looking at negatively charged or neutral. So actually, it's the same question that we always start off with.
So if it's negative charged, what that means is that we're going to go down the left part of the pathway. If it's neutral, then we're going to go down the right part of the pathway. How about if it's positive? That's a trick question. Positive charges are not nucleophiles, those are electrophiles. So it could never be positive. But it could either be negative or it could be neutral.

Concept #2: How to predict SN2 and E2 mechanisms.

You may also see NaNH2 and NaH (small, non-nucleophilic bases) react via an E2 for primary leaving groups, so keep that in mind!

Concept #3: How to predict SN1 and E1 mechanisms. 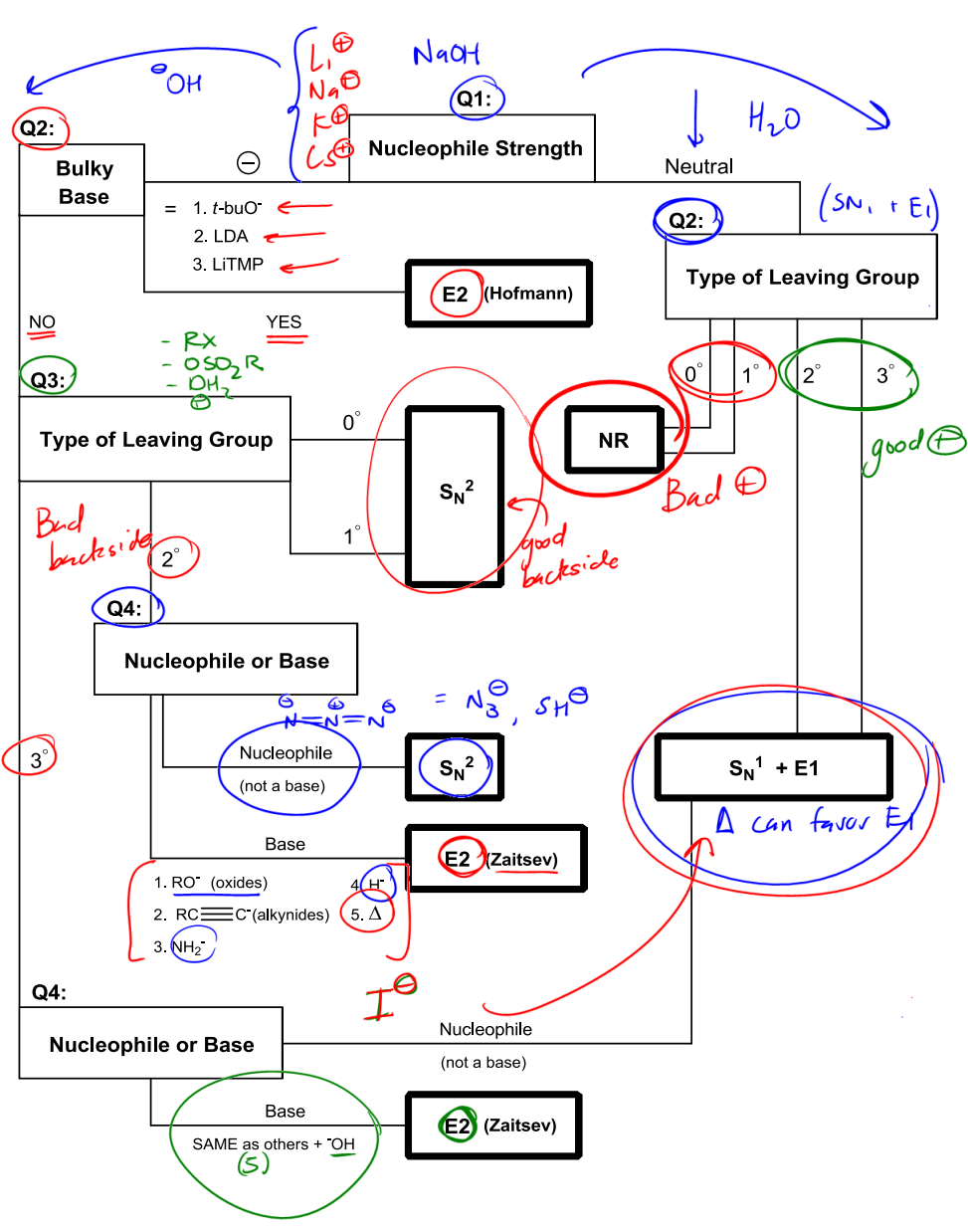