The SN1 mechanism is similar to SN2 in that you get a substitution product, but the path to get there is completely different. It’s important that we understand how it’s different from SN2.

Summary: A neutral nucleophile reacts with an inaccessible leaving group to produce substitution in two-step.

Now what I want to do is talk about the inaccessible leaving group part. That has to do with R groups and it has to do with carbocations. So basically, there's this trend about carbocation stability that says that the more R groups that you have directly attached to a carbocation, the more stable it's going to be.
It turns out that since you need carbocations in order for the nucleophile to attack it, that means that the more R groups I have on my alkyl halide, the better it's going to be. So what that means is that a tertiary alkyl halide or a tertiary halide is going to be way better at this than a primary. I'm just trying to point that out because a tertiary will be the one that's the most stable. Then this would be the side that's the most instable. It should be unstable, I'm sorry. Not instable. Oh my gosh.
Don't worry too much about this other stuff in the middle. I'm going to go through a much more robust explanation of carbocations in a little bit. But for right now just know that the more R groups, the better. The less R groups, the worse.

The slow step of this mechanism is the formation of a carbocation intermediate. These types of intermediates are unstable, so anything that we can do to stabilize them will help them form faster.

-R groups stabilize carbocations through a phenomenon called hyperconjugation. Meaning that the more substituted the carbocation, the more stable it is.

Concept #3: Understanding the properties of SN1.

You are a manager at Pepe and Son Carbocations Inc, and your boss has asked you to increase production of your product (carbocations in a box- these are awesome).

You have plenty of boxes, but it takes time for the conveyer belt to crank out these custom carbocations. 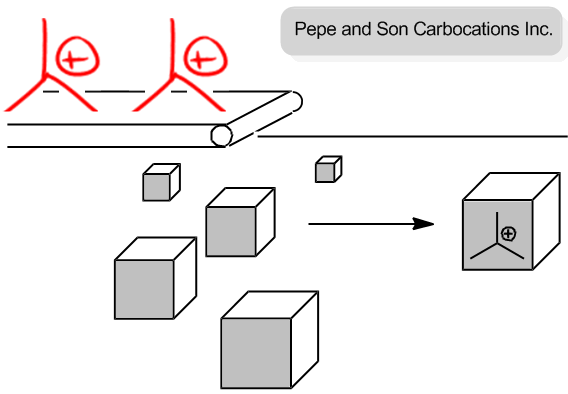 The product must be a racemate if the original leaving group is located on a chiral center.