Since we are going to be drawing A LOT of molecules over the next year, it makes sense to find an easier way to draw them. Hence, I now present to you :::drumroll::: the skeletal structure!

Things You Don't Have to Draw

Watch Out: ALL hydrogens on heteroatoms MUST be drawn explicitly.

Concept #1: How bondline is different from Lewis Structures.

So the bondline method is a way to simplify drawings of organic molecules based on the octet rule. So as long as you have a good understanding of the octet rule, you should be fine, like you should do very well at being able to convert drawings into bondline.
Alright, so it turns out that in order to save time we're going to be implying a lot of different types of information that you can derive from the octet rule. The first thing that we're going to do is that remember that organic chemistry is the study of basically carbon and carbon structures. So if we have to write out every single carbon, pardon my French, that's going to be a bitch, right? So what we want to do is figure out a way that we don't have to write C, C, C, C like for 100 times in a row.
So in the bond structures, carbons are implied. Okay? What that means is that every corner we're going to have like a zigzag pattern and every corner is going to be assumed to represent a carbon. I'll show you how that looks in a second.
Another thing that there's a lot of in organic chemistry, remember we're trying to eliminate repetitive things, there's a lot of hydrogens. It turns out that hydrogens are also going to be implied. Why? Because it would suck to have to write all of them. Alright?
Well then if we're not drawing hydrogens how do we know how many there are? Well, all you have to do is use the octet rule. We said that every carbon is assumed to possess enough hydrogens to fill its octet. So, for example, if a carbon has two bonds to other carbons and you don't show any hydrogens, we have to add bonds there in order for that carbon to fulfill its octet.
So think about it this way, carbon wants to have how many electrons in its octet? Eight. If it only has two bonds to carbon that means that there must be two bonds to hydrogen. That's the way we think. We kind of do a little bit of mental subtraction and that's the number of hydrogens that are going to be implied on that structure. Okay?
So what else is implied? Lone pairs because lone pairs would be super repetitive too. Okay? Lone pairs are implied. What that means is that we're not going to draw all the lone pairs, we're just going to assume that heteroatoms will have enough lone pairs to fulfill their octet unless otherwise stated, unless there is a charge. Okay?
Now, by the way, I have to define something. What the heck is a heteroatom. I just busted that out on you guys. A heteroatom is just any atom that is different from carbon. I'm actually just going to say it's non-carbon, non-carbon atom. Okay? So what that means is that nitrogen, oxygen, fluorine, all of those would be heteroatoms and we're not going to draw lone pairs, we're just going to assume that they have enough lone pairs to fulfill their octet unless otherwise stated.
And what we use for that is formal charges. So now that we know how to do formal charges. Formal charges are a huge part of the bondline structure. We never draw lone pairs, we only draw formal charges. And we use formal charges when an atom does not satisfy its bonding preference. So if there's a messed up bonding preference, we use a formal charge, we don't actually draw the lone pairs. Okay?
There's one extra rule that you guys should be aware of, that there's one tricky thing. All hydrogens on heteroatoms, do you guys remember what a heteroatom was again? Non-carbons, so oxygen, whatever, nitrogen. All hydrogens on heteroatoms must be drawn explicitly. Okay? The reason is because that could get tricky. If we just don't draw the lone pairs and if we also don't draw the hydrogens on a heteroatom then I wouldn't know does it have a hydrogen, does it have a lone pair, it would get confusing.
So in order to avoid that, we actually are going to include all the H's that are drawn directly on a heteroatom. Okay?

Example #1: Conversion of ethanol from electron dot to bondline

Cool. So I want to show you guys this little diagram that I drew showing how we can go from one to the other. So the electron dot structure is like the most simple form of structure that we drew in gen chem. Basically, what we had was that we drew out every electron explicitly and we would show that every single bond was made by the sharing of two electrons. Okay?
Then when we converted to Lewis structure, Lewis structure is also used in gen chem, so you should be aware of it. But Lewis structure was just a little bit different. The only difference is that instead of showing the dots being shared, it replaced dots with sticks. So what it did was anytime you had dots being shared, it replaced them with sticks and that was a Lewis structure. But notice that a Lewis structure is still kind of annoying because I have to draw every carbon, I have to draw every hydrogen and I have to draw every lone pair, so it's going to take me a long time to draw everything Lewis.
So then we decide, okay, well is there a faster way to do this. Well, bondline, look how fast that is to draw because I'm ignoring the carbons. I'm just saying that every corner represents a carbon. I'm ignoring all of the hydrogens attached to carbon because I'm just assuming that if this carbon has two bonds that must mean that it has two hydrogens and if this carbon has one bond attached to it, then it must have three hydrogens.
Then I'm implying the lone pairs. I'm not drawing them because I'm assuming that it has enough lone pairs to fulfill its octet and then lastly I am including the H because it would be confusing if I didn't include the H. Alright?
So that is the way bondline works and that's what we're going to do basically for the rest of this topic, we're just going to do a bunch of practice problems for this.

Practice: How many implied hydrogens does each labeled carbon have? 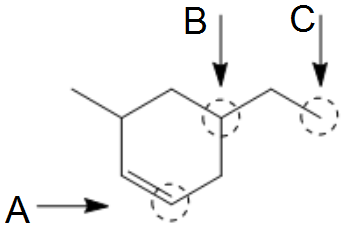 Practice: How many implied hydrogens does each labeled carbon have? 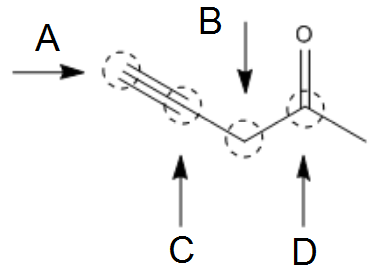 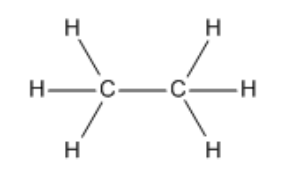 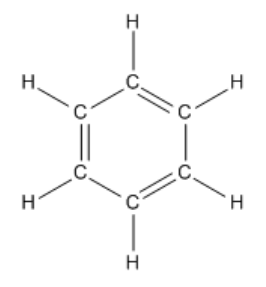 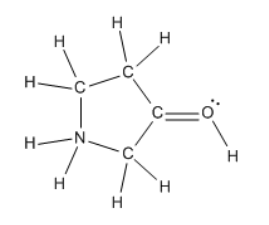 Hint: Remember that you need to include formal charges if atoms are not at their bond preference. 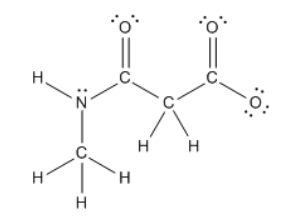 We’ll be drawing these for the rest of the semester. Hope you liking them so far!