1,5-dicarbonyl compounds generated from the Michael Reaction (enone + enolate) have the ability to undergo intramolecular self-condensation into 6-membered enones. Are you impressed yet?

Are you guys ready to have some serious fun? Good, because this topic is going to get nuts. I’m serious. We've learned from prior topics that 1,5-dicarbonyls have the ability to undergo intramolecular self-condensation and form six-membered enones. Remember we drew these before. What’s different is that now we’ve also learned a reaction that makes 1,5-dicarbonyl compounds and that’s a Michael reaction. When the 1,5-dicarbonyl is generated from a Michael reaction, that means that you had an enone and an enolate come together to make a 1,5-dicarbonyl. When that molecule cyclizes, that's called a Robinson annulation. Essentially, this is an aldol times three. Hoe was that? Because think about it, you had to use one aldol to make the original enone, right? The alpha,beta-unsaturated? That's one aldol. Then you use the second aldol, the enolate to attack it via conjugate addition. When we used the conjugate addition and I made the 1,5-dicarbonyl, but now what we're seeing is that now that 1,5-dicarbonyl is going to cyclize on itself and make a new six-membered enone. That’s the third aldol and that’s all enolate-mediated. I know. It’s too much fun, right? Not allowed to have this much fun in Orgo.
Anyway guys, here's an example of a Michael product because I've got a 1,5-dicarbonyl. Again, I would be faced with the choice where do I put the enolate? Do I put it in the blue or in the red position? You’re going to put it in the position that's going to give you the six-membered ring. If I use the red one to attack this carbonyl, do I get a six-membered ring? I get four. However, if I use the blue one, yes I get what I'm looking for. This is called the Robinson annulation. What I'm going to do first is I’m going to hope you guys draw the product and then we'll do one from scratch. For this, this molecule is really easy to draw. Once you have everything numbered out, you can draw your six-membered ring. I'm going to continue to keep those positions the way that I had them where I have 1, 2, 3, 4, 5, 6.
I just have to figure out what am I missing on each of these atoms. 2 is going to be a ketone. 6 is going to be what? 6 is going to be that alcohol and it's also going to have a methyl. That’s the products. But we know that these like to dehydrate. Then, I guess I shouldn’t have drawn it in the box, my bad. But the final product of this would be methyl here, double bond here. That is your cyclic enone. We've done this before. But now specifically, this is called a Robison annulation because it started off with a 1,5-dicarbonyl that was made through a Michael reaction. Similar to what we've already done but just connected to conjugate addition.
What I want you guys to do for this product is notice that I'm starting off from what is it called? From the Michael reaction. In this one, I’m starting from Michael because what I have is an enone and what is going to be an enolate. I want you guys to react those together. Get your Michael product and then do the Robinson annulation for that. Try your hardest and then I will comment and save the day eventually.

Okay. So, let's start off with the Michael products, that part's pretty easy to draw guys because I told you that for Michael reactions I always just like to draw the enone the same way it was before and then just put the enolate on top. So, I would just put my enolate on the top, like this, okay? So, that{s not bad because, I know that my enolate is going to form there, fair? Okay, cool. Alright, guys. So, now I have to figure out where to form an enolate so that it can cyclize into a six member ring, I've got I guess four possibilities, I've got my black, I've got my red, I've got my blue and I've got my green. Now, notice I've got a bunch of different possibilities here, what we're wondering is which one is going to make the best six-member ring? Well, there's two that I can count out immediately and that's red and blue, the reason is because red is only four away from this carbonyl, blue is only four away from this one. So, I can cross those out, I'm just going to put cross, okay? So, those are going to work, now is between black and green, okay? Black is six carbons away. So, this looks like you know it's a possibility, Green is 1, 2, 3, 4, 5, 6 carbons away as well but we have an issue, which is that three of the carbons within, three of the carbons within this chain are also in a ring. So, if I use the green one I'm going to wind up getting a bicyclic product, okay? So, ideally I'm trying to avoid using multiple atoms in my chain that are also in a ring, okay? Notice that if I use look, look at the difference, if I use black, how many of my atoms are in the ring? just two, I have one, let me stir, I have too many numbers going on, okay? I just hope, I hope you guys are learning about this, okay? So, if I start from black, I have 1, 2, 3, 4, 5, 6, so notice that only two of the atoms are within the ring.

Now, if I start from green 1, 2, 3, the first three atoms of that chain are in the ring. So, we wind up getting a bridge compound, it's going to be kind of difficult to draw. So, let's draw the other one instead, okay? And the other one is going to be more stable, okay? So, now for this compound because I have a ring involved I would actually recommend against doing my system where you draw a cyclohexane and then number it, I would try to rearrange this so it looks more like the enol that it's going to make soon, I'm going to rotate this bond, if you rotate this bond it's going to look more like what it will eventually look like. So, I'm going to draw it like this now. So, I've got this molecule here, double bond O but now I've got my methyl here and my carbonyl here, okay? So. Notice that all I did was I rotated it, okay? Now, this is much better guys because if my negative is here and the positive is here I see that I can just do this, okay? And, that's my new six member ring. So, what I'm going to get is a six member ring that looks like this, a new six member ring that has another six member ring on it, okay? This is the fun part about using micro reactions, okay? So, then, what are we missing on this thing? Well, this ketone still exists, nothing happened to that. Now here, I should actually have an O Negative but that's going to get protonated to an alcohol and then eventually this is going to be dehydrated and the direction it gets dehydrated is towards the alpha beta so that means that my enone is going to form right here, and that's going to be the final product of this reaction, my cyclic enone. Okay guys. So, as you can see, this is one of the hardest reactions in organic chemistry, it's difficult to visualize, it's kind of bulky, clunky, difficult even conceptualized sometimes, I hope that I've made it a little bit more clear, I'm really trying to do this in a stepwise fashion so that every step of the way you're like I guess that makes sense you're not completely lost, but in the end of the day Robinson emulation is a product that you'll have to practice drawing because you have to get good at it. Alright, guys. So, that's it for this topic, let's move on.

Practice: Provide the product for the following Robinson Annulation Reaction.

If you noticed a methyl group that vanished around 3:50 in the above video, you are not alone! Place a methyl there in your final answer and you will be good :)

Practice: How would you prepare the following compound using a Robinson annulation reaction between a di-ketone and an alpha, beta unsaturated ketone? 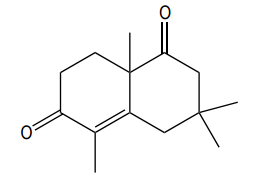 Practice: How would you prepare the following compound using a Robinson annulation reaction between a ketone and an alpha, beta unsaturated ketone?

A scientist needed to prepare large quantities of chemical intermediate I through the process shown below. What is the structure of intermediate  I?
In the following Robinson Annulation, compound A could be formed but is not a final product of the reaction. Why? a) A is formed irreversibly, but only in small amounts contributing to a lower yield of the reaction. b) A is too strained and is never formed. c) A is formed reversibly, but cannot undergo elimination, so it reverts back the prior intermediate. d) A can only be formed from the less favorable enolate and is therefore only a minor product of the reaction. e) The bonds in A are way too long and a molecule would never want to look that silly, so it doesn’t form.
Draw the intramolecular condensation product formed when 2,6-heptanedione is heated with aqueous sodium hydroxide.
Draw the product for the following Robinson reaction.
Predict the product of the following reaction
Provide a mechanism for the following transformation. Show all important flows of electrons, charges and intermediates. Where indicated, (in the structure-n-a- box)- draw the intermediates.
For the following reaction, two products are formed, in addition to water. If the oxygen of the enone is labeled with an isotope (18O for example), where will the label appear in the product? a) B and E only b) B and D only c) A and C only d) A, B, C, and D e) all 5 positions
Illlustrate the Robinson Annulation. Show two typical reactants and the resulting product and indicate where the atoms from the starting material end up in the product. A full mechanism is not necessary.
Complete the mechanism for the following Robinson Annulation Reaction. Draw all the arrows to indicate movement of all electrons, write all lone pairs, all formal charges, and all products for each step. If a new chiral center is created in an intermediate or in the product indicate with an * (ASTERIK).
Provide a mechanism for the following transformation. Show all important flows of electrons, charges and intermediates. Where indicated, (in the structure-n-a-box) draw the intermediates.
Provide the missing starting material, reagent, or major product in the box provided.
Which two components can be used to prepare the following compound through a Robinson annulation reaction?