Not all radicals are born equal! Some of them are going to make pretty smart decisions from an energy perspective, while others are a little on the crazy side. Let’s turn to some potential role models for guidance on this topic.

Drinking Responsibly vs. Getting Destroyed:

Selectivity is defined as the ability to only halogenate the carbons with most stable radical intermediates. 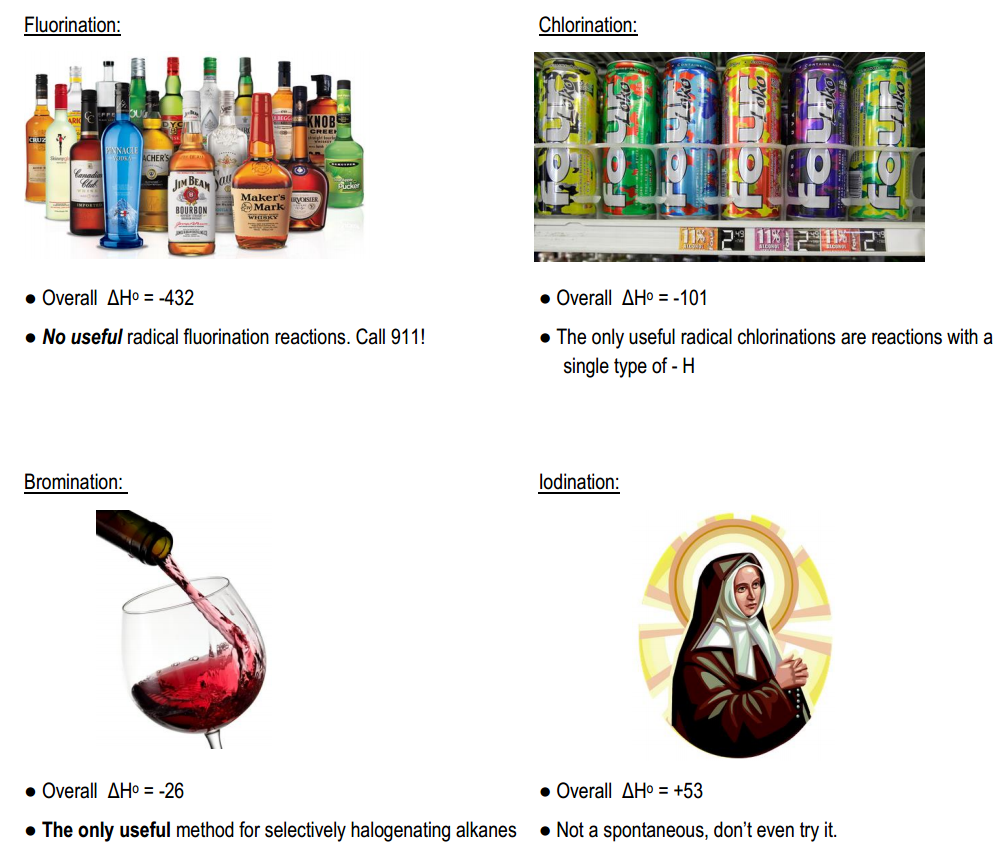 Example #1: Predict the product of the following Radical Halogenation. Would the following reaction be synthetically useful? (Yielding only one product).

Example #2: Predict the product of the following Radical Halogenation. Would the following reaction be synthetically useful? (Yielding only one product).

Example #3: Predict the product of the following Radical Halogenation. Would the following reaction be synthetically useful? (Yielding only one product).

Example #4: Predict the product of the following Radical Halogenation. Would the following reaction be synthetically useful? (Yielding only one product).

Now that you guys know the funny way to memorize which halogens are going to be more selective and which ones are less selective, now I want to teach you just really quickly, the rigorous actual reason why bromine is so much more sensitive than chlorination. It doesn't really technically have to do with how exothermic it is, in fact, it has to do with the Hammond postulate.
Remember what we learned about Hammond postulate, it is a way that describes what transition states look like. And the Hammond postulate is really the reason why bromination is so much more selective than chlorination. Let me show you guys that now.
Once again, my definition of selectivity hasn't changed, but it turns out that I'm going to use the Hammond postulate to explain why bromination is so much more selective. First of all, I just want to show you the energy diagram for radical chlorination. Let's go ahead and look at the x-axis first and just look at the coordinates.
Notice that all of these things should look familiar. Basically, this is the first step of my propagation phase. This is all propagation here. I'm just going to put prop. I've got my propagation phase. We would expect that that takes energy because you're breaking a bond, so that's going to be basically, this activation energy here. That's going to be the activation energy required to do that first step.
Then what that's going to make is an intermediate that looks like that. That's a radical. That's my intermediate. Notice up here I put rate-determining step. Remember that your slow step, the one that makes the intermediate, is always going to be your rate determining step. Does that make sense so far? Cool.
Then what happens is that in the next part of my reaction diagram, there's like a story, then what happens? Well, remember our propagation phase isn't done yet. I need to react my – well, in this case, this would be a termination step here. Let me just say here, this would be termination. And in my termination step, what I get is now two radicals colliding to make a new single bond.
Now just so you guys know, technically, this might come up conceptually, the activation energy for two radicals to collide and make a new bond is always going to be exactly zero. This is just a definition that you guys should know, that the activation energy of two radicals colliding is always zero. It doesn't take energy for that to happen. That's why there is actually no hump here. Usually, you would expect to see two humps, but there's no hump there because it doesn't take any energy for that to happen.
Now notice here that my overall enthalpy at the end is negative 101, like I told you guys. But what's really important that I want you guys to note is what the transition state looks like. Now I'm not going to go through this just yet, I'm just going to let you guys know, pay attention to what that transition state looks like, Hammond's postulate and now we're going to look at bromination and see how bromination is different. 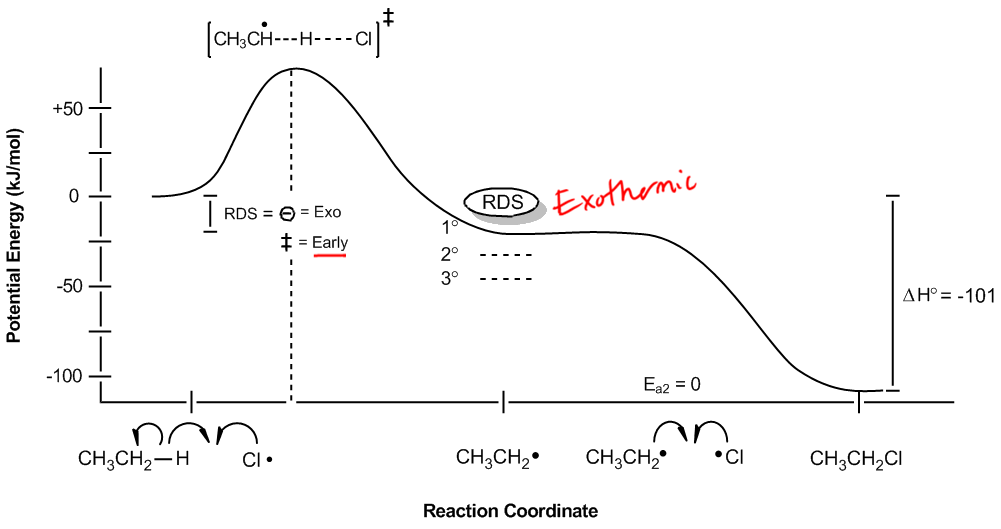 So for bromination notice that my energy diagram is a little bit different, I get the same first step, OK? Same first step and what I noticed is that I get my same intermediate, OK? Now there's just one major difference between my intermediate here and my intermediate up there, notice that the energy level for my rate determining step here is actually going to be endothermic, OK? What that means is that I actually having to put in energy in order to become this radical, Ok? Now look at the energy difference for my chlorination, for chlorination it actually was exothermic it actually released energy to make that radical, OK? Isn't that crazy so for chlorination it was exothermic to make that radical, for bromination it was endothermic well what's the significance there? What the significance is that remember that what did Hammond postulate say? It said that basically Hammond postulate said that your intermediate is going to look most like the side of your reaction or the side of......Yea the side of the reaction that has the highest energy level, OK? So in this case what that means is that the transition state for chlorination and bromination is going to look radically different, for chlorination the thing with the highest energy.... IÕm just going to use green as the highest energy is going to be the starting molecule, OK? So what that means is that my transition state looks a lot like my starting molecule, notice that my bond between the H and the stage two is really short that means that the intermediate looks a lot like the original alkane, OK? Does that make sense so far? So my intermediate really looks like the original, now we notice is that for radical bromination my highest energy state is actually the radical so what that means is that my intermediate looks a lot more like the radical than like the alkane notice that in this case my H is really far away meaning that this CH2 almost already has a radical on it, OK? Is that making sense so far so really the biggest difference is the way that the intermediate looks, OK? So why is that important? Well because if you think about it if the alkane if the transition state looks a lot an alkane then the energy savings of making a more stable intermediate isn't going to matter that much, notice that I have here that this is the primary this is the energy savings that I get as a primary radical but if you make a secondary radical or tertiary radical you save even more energy, right? So you would think OK it really wants to be tertiary so that it can make it dip all the way down here and be more stable but no chlorine doesn't care, why? Because chlorine doesn't really look at the radical once it's in its transition state really looks like it's alkane and the alkane was always stable to begin with so it doesn't really matter whether it's primary, secondary or tertiary because it looks like the alkane anyway so it doesn't really need to have a stable intermediate, OK?

Now let's look at bromination, for bromination what we notice is that it actually looks a lot like the radical already in the transition state, OK? So if I can make it secondary or if I can make it tertiary even better that's going to make my transition state a lot easier to make, it's going to make my transition state a lot more stable so the rate determining step can happen faster, OK? So basically that's the whole point, bromination cares a whole lot more about making the graph look like this, OK? Because the intermediate according to HammondÕs postulate looks a lot like the radical, OK? So what's this difference? Well the difference is that remember that if you had a transition state that looks like the original starting product you called that an early transition state, OK? And notice that over here what we wind up getting is a late transition state because late means that it looks more like the second step, OK? Once you have a late transition state you're going to care a lot more about how stable that transition state is or how stable that intermediate is because it's going to stabilize your transition state as well, OK? So what I'm trying to say is that my simplification of the exothermic rule works, OK? But technically the way that we explain selectivity is through Hammond postulate, OK? Now for some of you guys this is just going to be theoretically just helps you know more about this class, some professors are going to be really picky about it and actually want you to be able to describe this, OK? So it's really up to you guys if you didn't totally get this it's not the end of the world it's probably not going to be in your tests, OK? But I just want you guys to know it because I like to be thorough and I like you guys to know everything, OK? So let me know if you have questions but if not let's go ahead and move on. 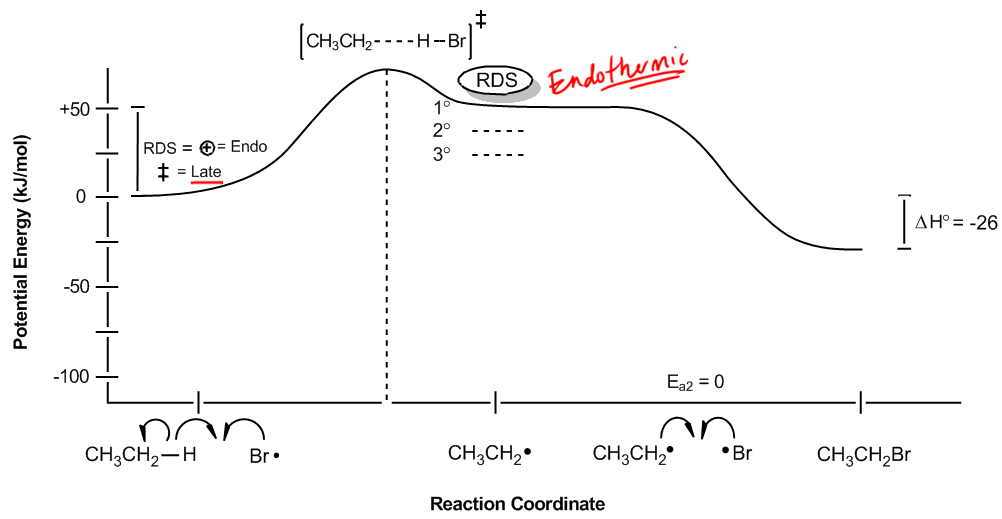