J. None of these 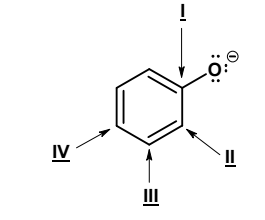 All Organic Chemistry Practice Problems Major and Minor Resonance Contributors Practice Problems
Q.The carbocation shown below belongs to a class of intermediates known as benzyl cations. a. Draw all major resonance structures expected for this car...
Q.Identify the major and minor resonance contributor(s) for the formate ion HCO2-.
Q.The following molecule is best represented as the hybrid of contributing structures. Draw the second important contributing structure in the space pro...
Q.Circle the correct statement(s) with regard to the resonance structure below. (can be more than one answer) (i) Both are of equal stability (ii) A i...
See all problems in Major and Minor Resonance Contributors

Our tutors rated the difficulty ofConsider the anion below, which is a resonance hybrid. Only ...as high difficulty.

Our expert Organic tutor, Chris took 4 minutes and 54 seconds to solve this problem. You can follow their steps in the video explanation above.

Based on our data, we think this problem is relevant for Professor Schnarr's class at UMASS.