3 and 4-atom systems aren't the only kinds of conjugated systems we will encounter. There are also 5-atom systems that we can draw molecular diagrams for. Let's take a look.

Alright guys. In this video I'm going to show you guys how to draw the molecular orbital diagrams for a 5 atom conjugated system, let's go ahead and get started. So, like propenyl ions, those 3 atom conjugated systems, 5 atom conjugated systems have the ability to resonate reacting in multiple locations, okay? Same idea, and regardless of the identity of the ion no matter whether it's a positive charge or a negative charge or anything in between, you can explain the reactivity of the molecule using molecular orbitals, okay? So, we're going to do here is, the number one thing we're going to do is we're going to draw the molecular orbitals for a 5 atom conjugate system because guess what, it's a little bit confusing and if we don't go through it together you may not know how to do it, okay? So, predict the LCAO model of 5 carbon system, identify the bonding, non bonding and antibonding orbitals, cool? So, guys what we're basically saying here is that we don't know what type of molecule or what type of ion this is, it could be 0 electrons, one electron or two, okay? But that is going to go into the fifth atomic orbital and we're going to figure out what to do with that later, for right now our main job is to fill in what's the atomic orbitals look like, okay? So, I've already given you the five molecular orbitals. Now, we just have to actually fill in the faces, okay? So, what do you think is a good place to go from here, like what's a good starting point, let's go ahead and fill in the first atomic orbital in each and keep it exactly the same, by the way, the rules are not going to change at all, I'm just showing you how to apply them to a five atom system, cool. So, then over here we should probably start flipping the last term back and forth flip, flip, flip and flip, not too bad, so the only ones who really have to decide are these three in the middle, okay? Now, we need to do is start putting in our node, just to remind ourselves, we should have 0, 1, 2, 3, and 4 nodes, okay? They have to keep increasing. So, let's start off with our first one, where do you think is the right place to put a node, if I can only put 1 and it needs to be symmetrical, it needs to be here, needs to be in the middle, okay? So, that's going to be our first node, that means we're going to ignore that orbital, it's going to get deleted, cool. So, let's go to 2, okay? So, where can we put two nodes in a place that's symmetrical? where can we do it? So, guys this is a little bit tricky but it's going to make sense when I say it, you actually have to put it on orbital 2 and on orbital 4, right? That's the only way to keep it symmetrical is to go on orbital 2 and orbital 4, which means that in this one, we're going to delete two orbitals okay, cool? Let's go to the next one. So, for the next one we need to put in 3, where could we put in 3? what do you think? so the place to put in 3 would be first of all we definitely went in the middle, right? Because the middle is, it's an odd number. So, you have to put one in the middle for sure, okay? And then the other places that you would put it would be here and here, okay? Now, those are the only really logical places to put it and the reason is because, let's say that you were put it next to the one in the middle? Well, then that would be very symmetrical, that would just be a bunch of nodes in one place, right? You want to keep it evenly spaced and let's say that you were to cover up these nodes here? Well, then what happened once again is that you have a lot of nodes next to each other and then not a lot of nodes here. So, what we're trying to do is keep our nodes evenly spaced. So, by evenly spacing it out we would have node then the only delete one and then node again okay, cool? And then finally, the last one should always be easy guys because it just means that every single position gets a node, okay? So, see how, I hope like, the rules didn't change, but I hope that it helps seeing how I think about it, okay? And doing it together. So, what that means is that now we're going to fill in our other nodes, that means that this one is down and this one is up, that's our face change, for this one it's actually going to be, what do I draw? I only draw this up because the other two are deleted, right? So, for this one I do a face change up, ignore the middle and then a face change down and then finally for this one they're all flipping, cool? Awesome guys. So, now we just filled in our molecular orbitals and now we just have to put in the pi electrons into the orbitals. So, we know that for sure, you would get two in psi one, you get two in psi two and whatever the identity of that fifth atom is, whatever's in here is going to go right here, okay? Now, what do we see that's interesting about psi three? what's the shape of psi three.

Now, by the way, this is going beyond what the question is asking but I just think it's a really cool application of what we know about molecular orbitals, what are the places that psi three could react? It only has three orbitals, right? It only has orbitals at position a position C and position E, right? Notice that position B doesn't exist and position d doesn't exist, okay? And that explains why whatever ion this is, let's say it's a plus charge, that it can only resonate to here and here, because that's the only, those are the only places where electrons could actually interact with other electrons because those are the only orbitals that do not have nodes, isn't that cool? Awesome. So, you guys are becoming molecular orbital freaks, you guys are totally getting this. Now, we do have to do our last part about the orbitals. So, guys, which there's a little bit of notation that we're missing, right? So, first of all, this is bonding, this is also bonding, anything that's below the 50% mark is bonding, anything that's above it is antibonding, so that means this is antibonding and this is antibonding, right? And that also means that we should add stars here, because these stars are missing, okay? And then, what is psi three? because it's right at that halfway point, anytime that you're at the halfway point that is actually considered nonbonding and it neither adds nor subtracts from stability, so the nonbonding one is usually actually the reactive one, it's the one that can react with other ions and other molecules and that's really where the fun stuff happens, it doesn't make it more stable to have electron there, it doesn't make it less stable to have electrons there, it's just basically kind of like, it's the place where the reactions happen most of the time at the nonbonding position, cool? Awesome guys, and there's no special notation for it, okay? Awesome guys. So, we're done with this problem, let's move on the next video.

Practice: Predict the molecular orbitals and identify the HOMO and LUMO orbitals of the following cation. 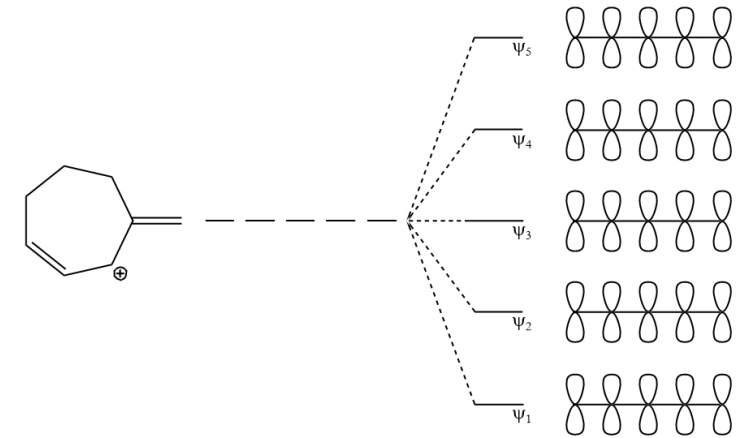