Ch. 18 - Reactions of Aromatics: EAS and BeyondWorksheetSee all chapters

By now, we are pros at EAS. We understand electrophilic aromatic substitution very well. But it turns out that that's not the only substitution mechanism that benzene can undergo. It turns out that in the presence of strong nucleophiles, benzene can actually be made to do a nucleophilic aromatic substitution also call SNAr.
Unlike EAS where the addition step is initiated by the presence of a strong electrophile. Remember that we’re always trying to make that strong e plus and then the benzene attacks. It turns out that you can also start another addition elimination reaction with benzene by a strong nucleophile attacking the benzene. You might imagine, this must be a very strong nucleophile. It actually attacks such a negative entity. But the thing is you also need a good leaving group on your benzenes.
You’re going to need something that you can kick out when the electrons get there. In some ways, this reminds us a little bit of SN2 because remember that SN2 was a backside attack. It was nucleophilic substitution. This is also nucleophilic substitution. The only thing is that it's not concerted. It's a two-step reaction. It’s distinct addition and elimination step.
There are similarities but then there are also differences. Again, this is called a lot of different things. It's known as instead EAS, it’s known as nucleophilic aromatic substitution. It's not abbreviates NAS. Don’t call it that. That’s something different. It’s called SNAr. The SNAr mechanism is nucleophilic aromatic substitution. Also in some text, it’s even called the ipso-substitution. That just refers to the fact that you have two groups sharing a carbon for a little bit in the intermediate.
Let's go ahead and remind ourselves of EAS. We don’t really need to but we’ll quickly run through it so you guys can see how SNAr is similar and different at the same time. Remember that your first step is always the slow step to create the sigma-complex. This is a cationic sigma-complex because you get a positive charge. That positive charge is distributed throughout the entire thing. We could just draw that as a dotted line with the positive in the middle.
Remember that after the resonance structures, etc. you get an elimination step and that’s a beta elimination where you grab an H, you reform the double bond and you’d get a substitution product that we started off by an electrophile, so EAS.
With SNAr, the reaction is really much, much different. What we get is that the reaction starts off with a nucleophile attacking the benzene. It’s going to attack the site where there is a strong or a good leaving group. Unlike SN2, where I immediately would have just kicked out my leaving group and it would have been backside attack and that’s done. This is not backside attack because there is no backside. It’s two steps, meaning that what we're going to do is we're going to break a bond on the benzene and make an anionic intermediate. We're going to get instead of a catatonic sigma complex, we’re going to get a negative charge that’s distributed throughout the same five atoms. This is what we call the anionic sigma complex. It’s similar but it's a negative charge instead of a positive charge.
Then what happens? Eventually the negative charge is going to reform a double bond. Eventually the negative charge is going to reform a double bond, kick out my X and I'm going to get in my elimination step, I get my nucleophile substituting where the X was. As you can imagine, this anionic intermediate is extremely unstable because benzene already has so many electrons, and putting a negative charge in there, that’s going to suck.
Typically, we're going to need lots of heat and lots of pressure to make these work. In early example of this was a reaction called the Dow Process that was actually started by the company Dow. It was an early method to make phenol. But they had to work for it. The way they worked it was they got chlorobenzene and they reacted NaOH, which we know is a strong nucleophile with 350 degrees Celsius and high-pressure. We need all that so that we can actually make the intermediate. Remember the intermediate would look like this. You attack and then you break off into a lone pair on the top.
What I want to do is draw the resonance structures. Let's do that. The resonance structures for this would look for this anionic intermediate would look like this. I have Cl, OH, double bond, double bond, negative charge. That's going to make a bond and break a bond. I’m going to get something that looks like this. That is going to again make a bond and break a bond. Then I'm going to get something like this.
What happens at the end? At the end, remember I said there’s an elimination step. The elimination is that it's self-eliminating. The lone pair reforms a double bond and kicks out the chlorine. That is going to give us basically phenol. In this case because it happened in a basic environment, deprotonation does take place. Usually you’re going to need an extra equivalent of acid to turn the phenoxide into phenol.
This is an early method of making phenols that used the SNAr mechanism. But it wasn't very efficient. This is not how modern-day phenols are made. Made much more simply in other ways. Now that we understand the general mechanism of SNAr, let's explore a little bit more on the next page.

The Dow Process (mentioned above), a typical SNAr reaction, requires tons of heat and pressure to proceed forward. This is due to the instability of the anionic sigma-complex. However, Withdrawing groups or Heteroatoms in the Ortho or Para positions (WHOP) will stabilize the intermediate. 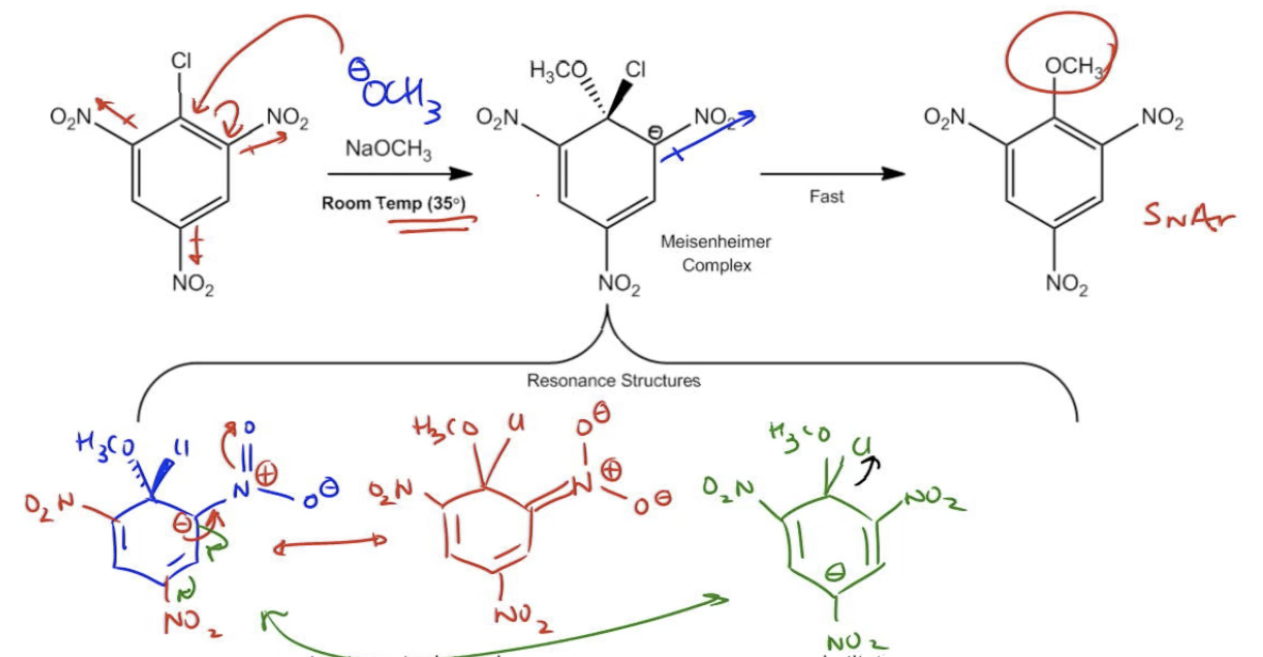 Example #1: Which ipso-substitution is more favored

First of all, I don't really need to draw resonance structures to know the answer to this question because all I'm looking for with an SNAr mechanism is I'm looking for WHOPs. The one with more WHOPs is going to win.
Let's analyze the first one. The first one, I've got a heteroatom on the meta. That's not really going to help me. That doesn't really help. Then I've got a donating group on the ortho. I have a heteroatom on meta, donating group on ortho. EDG on ortho. Does that help me? No. That's terrible. This one isn't very favored.
Let's go to the next one. The next one I have a heteroatom on ortho. I have a heteroatom on meta but that's not really going to help me, so I’m not going to write it down. I have a withdrawing group on meta which again isn't going to help me. I'm not going to write it down. Overall, two of these groups don't really help. That nitrogen on the meta and the withdrawing group on the meta don't really help because notice that, I’ll draw the resonance structure in a second. The resonance structure isn't going to hit those carbons. But I do have this one atom here that's going to make it more favored than the other because the other didn't have anything going for it. In fact, it had a bad group. This one at least has one good group and one good location.
Drawing the resonance structures, what we'd find is that you get something like this where you’ve got chlorine, you've got OEt. You’ve got negative and that negative charge is going to resonate to where? It's going to resonate. I'm just going to put the double bond here. It's going to resonate to there. It’s going to resonate to here and it's going to resonate to here.
I've actually got a bad group in place because this is going to push electrons into my negative. That's terrible. What I get for the reaction is this attacks here. I move the electrons down here. I wind up getting a negative charge on that end. I have chlorine. I have OMe, methoxy. I've got my dotted line representing my anionic sigma complex and my negative charges. I forgot there's a nitro group over here. My negative charge is two of them aren't stabilized but one of them is. This one is stabilized because it’s on a heteroatom. This one is going to be more favored. This one’s going to be less favored.
In terms of favorability, you could actually relate that to temperature. Meaning that this reaction could occur possibly at a lower temperature than 350. The one above may need more than 350 because it's got that donating group that's destabilizing it.
Makes sense? Let's move on to the next question.

Example #2: NAS in the addition-elimination pathway

Practice: Provide the structure of the product formed from the reaction of 1-bromo-2,4,6- trinitrobenzene with one equivalent of sodium methoxide.

Sorry for any confusion, guys. Even though Jules uses the abbrevation "NAS", just know that SNAR will be the correct, more direct term to use moving forward :).

Practice: Provide the major organic product for the following reaction.

Practice: Provide the major organic product for the following reaction.

Practice: Which of the following compounds is most likely to undergo nucleophilic aromatic substitution via the addition-elimination pathway?

Practice: Which of the following compounds is most likely to undergo nucleophilic aromatic substitution via the addition-elimination pathway?