We can name Carboxylic Acids using two naming systems: IUPAC and Common. Let's learn both just to be safe!

Before we can learn to react with carboxylic acids, we need to know how to name them. Let's talk about carboxylic acid nomenclature. There's two really competing and popular ways to name carboxylic acids and I’m going to teach you both. There's the IUPAC system and the common name system, and they're both good in their own ways. You're going to see them both this semester. Let’s start off with the easier one, IUPAC. In the IUPAC system, carboxylic acid is going to be a modifier. You’re going to modify your root chain. You take out the e and your place the e with the suffix -oic acid. This should make sense. If you think about it, you've heard of benzoic acid before. That's that ending there. Substituents are located using numbers. Same thing we're used to. If you have a two methyl group, you would put 2-methyl. Everything is normal. The common name system is a little bit tricky because it turns out that carboxylic acids are some of the oldest compounds to be studied so they were given means far before the IUPAC convention of 1919. What that means is that sometimes you're going to see carboxylic acids named with the common naming system. Let me give you case in point. How often have you heard of ethanoic acid? Probably not that often. How often have you heard of acetic acid? You’ve heard about that since general chemistry. Why do we call it acetic acid? Where does that name come from? It doesn't come from IUPAC. That’s a common name. Like acetic acid, we're going to need to learn these common names.
The way that we name carboxylic acids with common means is by memorizing the first five common names. Their common names have to do with how many carbons are in the chain. A one-carbon carboxylic acid is formic acid. A two-carbon is acetic acid. Three carbons is propionic acid. Four is butyric acid. Five is valeric acid. I'm not going to ask you to go more than five. Your professor probably won’t either but then again, it's between you and your professor. I really haven't seen anything more than five in introductory Orgo 1 and 2. That means that in general, whatever alkane you have, if you’re naming it in IUPAC way, it becomes alkanoic acid. That’s what we’re naming. The exact name depends on the identity of the alkane.
Also, something I’m jumping around, but I told you that you have to memorize these common names but it turns out that there's another difference. When you're using common names, you don’t locate substituents with numbers. I know. It doesn't make sense. But instead you’re going to use the Greeks. You’re going to use the Greek symbols. When I mention Greeks, I'm talking about alpha, beta, gamma, delta, epsilon. Again, first five. I don't think you should have to know beyond epsilon. If you're pledging in a sorority or fraternity, you should probably know beyond epsilon but for right now, that's going to work. We’ve got these two different systems. You need to know both.
Finally, one last thing and then we’ll start some practice problems. Whenever you have a negative anion of a carboxylic acid because you know that these things tend to give way to protons. Oftentimes, you'll see a carboxylic acid as an O negative. If you see it as an O own negative, you’re going to replace the oic acid, you’re going to replace that with -ate. Ate being the suffix for a negatively charged species. Acetic acid turns into acetate when it's a negatively charged species. That should just make sense. What I want you guys to do is look at this first compound, give me both the IUPAC name and the common name as best as you can do and then I’ll step in and help you guys out.

First 5 common names that you should know: 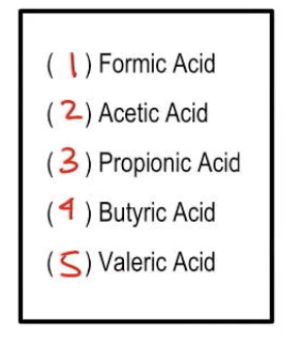 Example #1: Give the IUPAC name

Let's do the IUPAC name first, so the IUPAC name is pretty straight forward, we're just going to take the four carbon chain. Notice that no matter which direction I go, it's always going to be four carbons, so that means that the root name would be butane but I'm obviously going to change that to now be butanoic acid and now I just have to worry about my substituent, which appears to be on the second carbon, so this is going to be a 2-ethylbutanoic acid, there shouldn't be a space in between. So, I'm going to move the ethyl closer perfect, okay? So, 2-ethylbutanoic acid, let's go to the common names, so the common name is going to be, you have to memorize these, I know that four, it actually sounds like butanoic acid, it's butyric acid. So, I have butyric acid, the biggest difference guys being that, so that's not really hard, the biggest difference is that now I'm going to use a Greek symbol to represent the location of that ethyl group. So, which Greek symbol do I use? and actually guys, this is something I didn't mention I was waiting for you guys to do it in this example, the alpha carbon for all purposes of carbonyls is always the carbon next to the carbonyl, so the carbonyl carbon doesn't get a Greek letter, that's just your carbonyl carbon, your alpha carbon is the one next to it, that's a very important carbon. So, this would actually be alpha-ethylbutyric acid once again, I'm going to move it closer so that it looks right, okay? So, that means that that's the Alpha position, this is the beta position, gamma etc, okay? You always start at the one next to, that's where you start with your greek symbols, okay? So, let's move on to the bottom of the page. 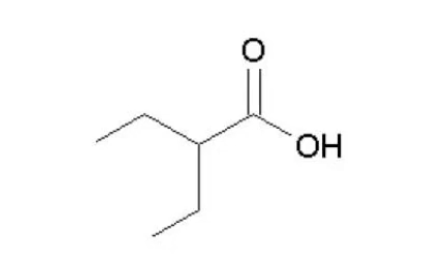 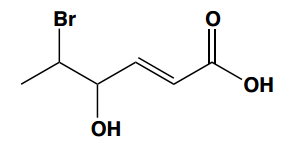