Like double and triple bonds, –OH groups change the reactivity of an alkane. We will now take a deeper look at how to name these functional groups, called alcohols.

Concept #1: How to name alcohols

Similar to double bonds and triple bonds, alcohols are also going to get a modifier, but that modifier is going to be instead of -ene or -yne, it's going to be -ol. Actually, you can remember that the modifier is -ol just by looking at the word alcohol. It tells you the modifier's going to be -ol.
It turns out that a lot of the same rules are going to apply for the alcohol as the double bond. Example, alcohols are actually going to receive highest priority in numbering alkanes. What that means is that alcohols get more priority than anything else. That means that if I have alcohol and an alkane, I'm going to try to give the alcohol the lowest number.
But even if I have an alcohol and a double bond, guess what? If they're competing against each other, I'm still going to go with the alcohol. The way that I've always said it in orgo 1 is that alcohol beats all. That doesn't mean that it gives you a hangover the next day and makes you do stupid shit the night before. It means that it's going to beat all the other different substituents that you can have. So alcohols are going to beat all.

Alcohols are named as modifiers, meaning we add a suffix modifier to the root chain:

Alcohols receive highest priority (even more than double and triple bonds), so try to give them the smallest number possible. Remember: Alcohol beats all!

The thing is that there's actually – I'm just going to star this. Whenever we get into the idea of modifiers, now we have differences in where we can put the location.
Basically, in the previous example, I showed you that you could put the location before the root. And if you do that, that's fine. If you put your location before the root, so, for example, 1-pentene, that would be considered the old-school method and that's fine. But if you have more than one modifier present, then many times it's going to be more advantageous to use it within the root. If it's within the root, that's what we call new school.
I want to show you an example of what that looks like, so 1-pentene. This would be the old-school method. The new-school method would be – and, by the way, new school and old school isn't really like a scientific term. It just has to do with as names started getting more complicated, there started to become more of a need to use it within. And it's pent-1-ene.
I know that the second one doesn't look quite as nice. It's like, yuck. There's numbers inside of my word, but sometimes that becomes essential, especially when you have more than one modifier in the word.
For example, let's say that I had a double bond and an alcohol. So let's say that I had pentenol. Notice that the 'en' describes that I have a double bond and the -ol describes that I have an OH somewhere. Let's say that they're in positions 1 and 4. If I just say 1,4-pentenol, that's really confusing because I don't know which one is where. I don't is the ene on the 1 or is the ene on the 4. That's why I'm going to have to put at least one of these inside of the root. So then this would be a lot more clear.
For example, if I did 1-penten – well, actually, let's do it the other way. 1-pent-4-enol. That would be a lot more descriptive because now I would know, okay the 4 directly describes the alkene. I'm just trying to show you that that would be more like a new-school method to put at least one of the numbers inside of there.
And conversely, on the other hand, you also could have written it – you would have been able to write it as 4-penten-1-ol. That would have also been fine. It's just about making sure that each modifier has its own number.
For this compound, notice that I was kind of giving you this whole pep talk because you're going to need it for (b). So for this compound, I want you to try and solve it on your own. Realize that it has a double bond and an alcohol, so it's going to provide a special challenge. And go ahead and try and get the right answer.

The biggest takeaway here is just to remember that having more than one location in front of your root name is always a mistake!

Place at least one of the locations within the root (or even all of them). 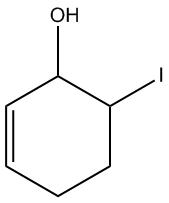