There is a stronger oxidation out there that exists besides bromine/water, which turns monosaccharides into aldaric acid, but oxidizing both the aldehyde at the top and the bottom alcohol forming a diacid.

Hey guys, so in this video I'm going to discuss a pretty easy reaction called strong oxidation of monosaccharides. So guys, we've already learned that bromine and water mixed together, when exposed to monosaccharides, will make something called an aldonic acid, where you're going to turn the aldehyde at the top into a carboxylic acid at the top, you guys should remember this pretty easy reaction I already taught it to you, okay? But, it turns out that we can do a stronger type of oxidation in this, because that was called weak oxidation, remember? So youÕll be saying why is it weak? Well it's weak in relation to this oxidation that we're about to discuss, this oxidation not only oxidizes the top aldehyde to a carboxylic acid like bromine water did, but the important part it's also going to oxidize the bottom alcohol into another carboxylic acid, so the product is going to be what we call a diacid, okay? A diacid is just one of the names that's given for a dicarboxylic acid, you can call it a diacid, so when exposed to nitric acid, which is the reagent of strong oxidation, monosaccharides can be oxidized into diacid derivatives called aldaric acids. Now, those names are a little bit confusing because they're so close together, aldonic acid versus aldaric acid, I don't have a perfect way for you to memorize it, so just keep in mind that it's tricky and you might want to put that on a flashcard, so that you can say Òokay, this is what the aldonic acid has the one carboxylic acid and the aldaric acid has twoÓ, okay? Now, let's just go over the reagents very quickly. The reagents, guys, are very simple. It's just going to be some kind of aqueous nitric acid and a lot of times you'll find that in the problems or in the textbook at heat, but if there was no heat, you would still know this is going to be a strong oxidation, that he isn't like one hundred percent essential that it needs to written how, even though reaction conditions typically will be hot, but you know, sometimes different problems can be written in different ways, so just letting you know that it always revolves around nitric acid. Now, one thing that's interesting about creating these aldaric acids is that now we potentially created a symmetrical molecule, because notice that the top functional group is identical to the bottom functional group, so what that means is that due to the symmetry of those carboxylic acids, different monosaccharides can lead to the same aldaric acid product, so what I'm basically saying is that you could be sort of two different types of saccharides but because of the fact that now both, the top in the bottom of the same functional group, they could actually lead to the same product because they could be identical once you flip them, okay? IÕm not going to show you an example because it might be hard to visualize now, but just letting you know that this is the thing, that sometimes you could get two different monosaccharides making the same aldonic, I'm sorry, aldaric acid product, okay? So let's go on to the next video where I'm going to do a practice problem with you guys. 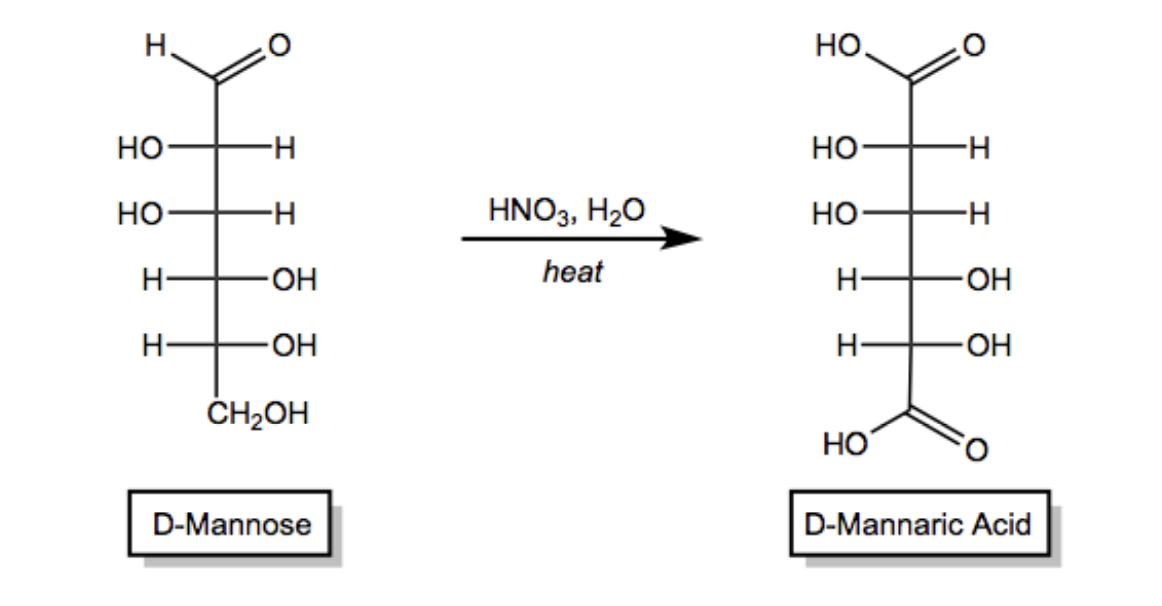 Note: We are in the process of re-doing the above video. In the meantime, focus on the concepts of oxidation and optical activitity, while ignoring the structures of D-Glucose & L-Gulose being similar. :)