In basic conditions, monosaccharides will undergo a multitude of tautomerizations and isomerizations. The most profound of these is the ability of aldoses and ketoses to reversibly rearrange.

On this page I want to talk about another transformation that monosaccharides can undergo in base. So, guys in basic conditions monosaccharides will undergo a multitude of tautomerizations and isomerizations and this is one reason that we typically don't want to expose monosaccharides to base because you get such a mixture of isomers that it just makes a big mess out of things, the most profound of these transformations as possible is for these is the ability as aldoses to reversibly rearrange into ketosis in the presence of base, literally making brand-new monosaccharides, this process is called a bunch of different things. So, we have to keep our names straight first of all, it simply just called an aldose ketose rearrangement. So, that's the title of this page, it's also called the enediol rearrangement. So, enediol is the intermediate that's going to be used for this process and this is called the enediol rearrangement, if your professor says that they want you to be able to draw the mechanism for the enediol rearrangement, this is the reaction they're talking about, finally it's actually also called the Lobry de Bruijn-van Ekenstein reaction, yes, that's the real name, if you look on Wikipedia that is a name for this reaction.

So, guys, we got to keep our names straight but at the end of the day that's really the hardest part, it's not going to be a super hard mechanism, the name is worse than the actual mechanism, okay? So, guys before I show you the mechanism I want to show you the general reaction. So, you guys can get a sense of how potentially inefficient this type of reaction is. So, once again, we're going to pick on beta-d-glucose pyranose because this is a, this is a monosaccharide you should know very, very well by now and what have we already discussed? we've already discussed that in base it's possible for a beta anomer to mutorotate to a combination of alpha and beta anomer. So, that's called mutorotation, right? We've also already discussed how it's possible in base for a monosaccharide to epimerize the c2 position and that's what we get here in the second product, where glucopyranose turns into a monopyranose, because the c2 position becomes racemized where now you have half of it going right and half of it going left, okay? That is called epimerization but finally, we also have the ability to completely rearrange glucopyranose into a furanose, that's made out of a ketone. So, it's possible for the beta d-glucopyranose to become d-fructosefuranose, which is just a completely different monosaccharide, a different ring, everything is different about it, and this happens through what we call rearrangement or what's also as we listed with known as the enediol rearrangement, okay? So, what I'm going to do in the next video is I'm going to show you guys the whole mechanism for how we obtain this molecule. Alright, let's go to the next video.

So, we already know that base is the ability to remove the alpha hydrogen of a monosaccharide and that's actually the same exact step for the enediol rearrangement because remember, the enediol rearrangement has to get to the enediol intermediate so that means that the first few steps of this reaction are exactly like epimerization. So, my OH comes in, grabs the alpha hydrogen, forms the double bond, kicks electrons up to the O, what I wind up getting is a double bond with a negative charge, where stereochemical information has been lost from carbon 2 and we know that to get the enediol, we're going to protonate, let's go ahead and do that, we're going to protonate with the conjugate base of with the conjugate acid water, and that's going to give us our enediol, okay? And then we know beyond that, that if we then just go backwards throughout the whole mechanism that we just did and deprotonate that H, we can go and epimerize C2 to get mannose, let's show how that happens once again, you would then use OH minus and just pull that H, right back on to form a negative charge here, double bond, and then we would use water to protonate the alpha position because you reform the carbonyl, the double bond grabs the H and kicks off the OH and we wind up getting is D-mannose. So, this whole process that we just did was just epimerization, okay? But it was epimerization specifically through the enediol mechanism, okay? Now, this isn't the only thing that you can do with an enediol because what if the base instead of grabbing the top proton, what if it grabbed the second proton, what if it grabbed the proton off of carbon 2, would that change the product? actually it would change it very significantly. So, let's see what would happen instead of grabbing the top one we grab the bottom one. So, if I grab the bottom one and form a negative charge, it's going to be two arrows, let's just do this really quick, OH minus, I grab the H and then the H gives its electrons to the O, what that's going to form is a double bond here with a negative charge and an H, and guys, this is an enolate once again, but now let's the other enolate, okay?

So, now it's possible to just protonate. Alright, it's possible to just basically regenerate that double bond and get rid of it. So, basically what I could do is I could take my water and I could use this negative charge here to make this double bond and protonate the output position. So, basically everything that I did with this enolate would happen with this one but now it's happening with the double bond being reformed on c2 instead of c1. Notice how on this enolate above for the epimerization c1 reformed the carbonyl but for my bottom enediol C2 formed the carbonyl. So, what that's going to do is it's going to give me a double bond here now, an H, just attached an extra H, it's attached to here and this blue H is still, this blue H is still here, okay? So, what we just did is we just turned d-glucose, which is an aldohexose into, we just turned it into a ketohexose d-fructose because we were able to use the enediol rearrangement. Now, I want to point something else out to you guys. Now, that we have the carbonyl at c2 theoretically now it's possible to even epimerize the C3 position because now I could easily use base to pull off this H and do the whole system over again, in fact, I can even form a ketose through an enediol rearrangement I could form a ketose here at the C3 position and so on and so forth but these types of crazy rearrangements only tend to happen in very strongly basic conditions. So, usually, we're not going to see epimerization or isomerization of the entire chain, usually the professor is just asking for an enediol rearrangement, they just want you to do it to one carbon not to do it to all the different carbons because that could take forever and that would require very, very basic conditions to make that favourable. Alright, so guys, I hope this video helped. Now, you understand how the enediol intermediate is a very important intermediate, not just for epimerization but also for what we call rearrangement because now we can get a keto or a ketone from it, awesome guys. So, let's move on the next video. 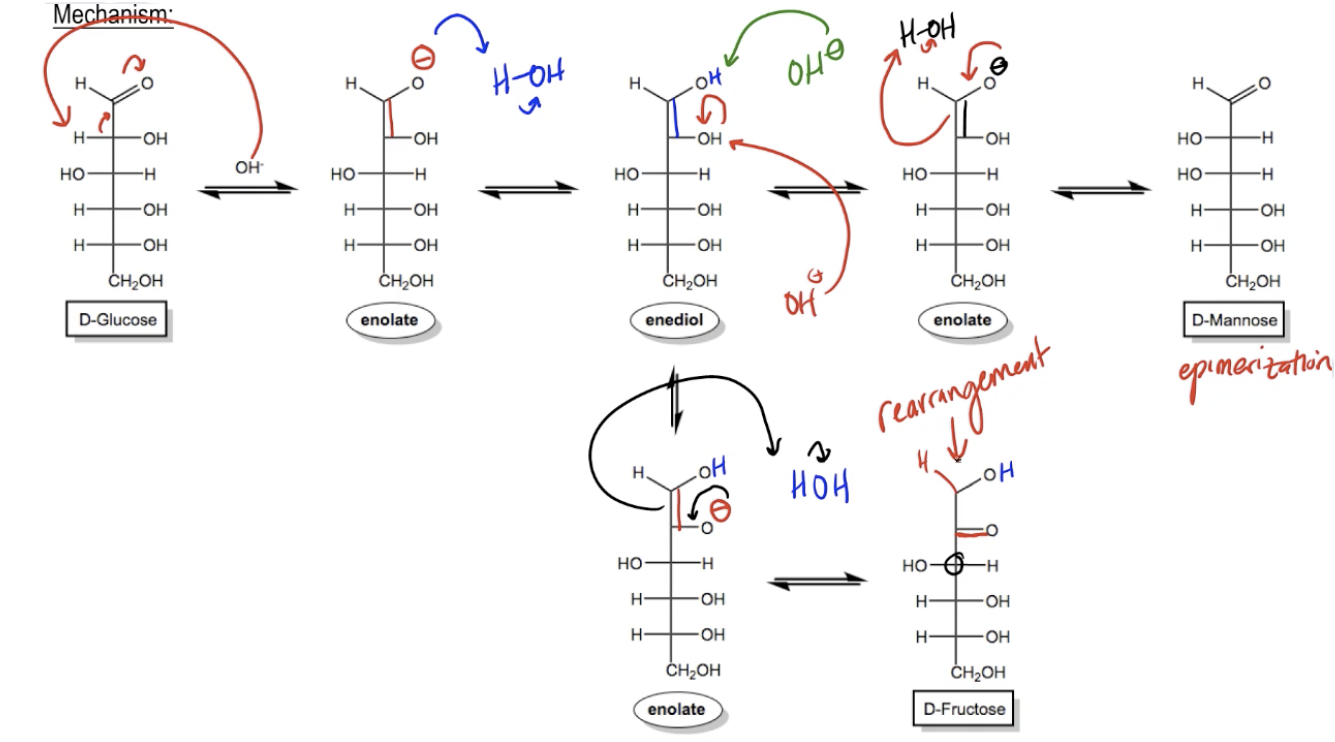