All monosaccharides come in dextrorotary (D) and levorotary (L) forms. You may have heard these terms before when learning about optical activity. Another way to descrbise these D and L forms are enantiomers of each other. 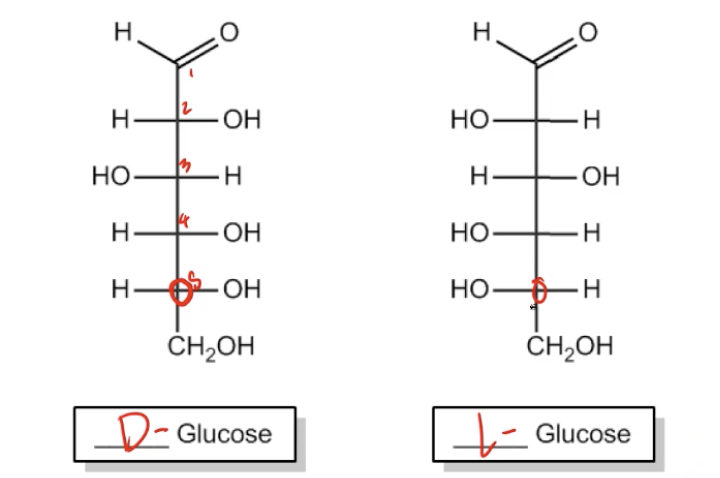 Practice: Provide the generic name, including stereochemistry, for the following monosaccharide:

Which stereochemical description best fits the following carbohydrate? 1) (+)–D–4–(R) 2) (–)-L–4–(S) 3) (–)–D–4–(R) 4) (+)–L–4–(S) 5) D–4–(R) You can’t determine +/– from a chemical structure.
Given that compound A is D-glucose, which of the following structures corresponds to L-glucose?
Pick the ‘D’ sugar.
The structure of D-mannose is shown below. Draw the structure of L-mannose.
Erythrose is an aldotetrose with the OH groups on carbons 2 and 3 on the same side of its coventional Fischer projection. D-erythrose and L-erythrose area) isomersb) stereoisomersc) enantiomersd) all of the abovee) none of the above