So, first I'm just going to go over the rankings in order and then I'll go over each individual chemical shift just to reinforce what we just learned. So, our highest number, our most deshielded is going to be H5, okay? Because H5 is on a double bond so that has the highest range as you can see above, okay? So, it's going to go from H5, then what's the one with the next highest number, okay? That's actually going to be H2 because H2 is directly attached to a carbon that has fluorine the most electronegative atom on it, so that would be an example of z CH, okay? So, I'm going to come in next. So, H5 was double bond, H2 is Z CH, okay? So, then after that what I'm going to get is H3, okay? Because H3 is on a triple bond and remember that triple bond results a little bit lower than a fluorine would result then we would get is H4 because if you notice H4 is actually allyl, okay? So, this would be an example of Z CH but it's allyl, okay? Now, I'm just going to erase this and move it up a little bit Z CH. Now, allyl is actually on the lower side of the Z CH but it still counts, okay? So, that's Allyl and then finally we would end up with H1 at the bottom because it's nothing, all it is is just CH, it's just an alkane, okay? So, hopefully that makes sense so far. Now, let's go over the exact chemical shifts.

Now, something that I neglected to mention in the previous example when I showed you guys the spectrum is that chemical shifts are actually denoted by a Greek symbol and this Greek symbol is the lower case Delta, okay? So, the lower case Delta is the same thing as saying parts per million, okay? So, I'm just going to put all of the different parts per million here, okay? What I would expect for h5 is that it's somewhere between 4.5 and 6, we'll just give it a shift of five, okay? What we would expect for h2 is that it's on the top range of z ch because as a fluorine present, so we are going to say that around four then for h3 since it's on a triple bond it's somewhere between 2.5 and 3, we'll just give it a chemical shift of 3, make it easy, okay? Now, for h4 because it's a low, this is going to be around 2. Remember, I said that usually they're a little bit below two. So, you know what even though I could make it easy I could say 2, I'm just going to be a little bit more accurate I'll say that it's like 1.9 because usually it's right below 2, okay? And then finally, we have h1, which it's secondary. So, it's actually probably not going to be 1.0, it's probably going to be a little bit more in the middle, probably something a little bit more like 1.4, okay? So, I got a little bit tricky at the end, sorry if I'm blocking that a little bit, I'm not trying to trick you guys or anything, just trying to show you guys kind of the way this works, the general trend, and that a lot of times you are going to see little fluctuations with these values and the biggest point isn't to argue over 3.9 or 4, it's to memorize and understand kind of the general idea of what's going on, okay? One more note about this, you know, these values that I taught you, it might be in your best interest to learn these values because the sheet that you get on your exam in case your professors just giving you these shifts, right? There are some professors that really don't care for you to memorize them, they just give them to you, you might not understand them the same way that you understand them here, the sheet that you get, okay? So, sometimes it's just better to learn it anyway and then you can go into your exam more confident, okay? So, I'll leave that one up to you guys but anyway that being said, let's go ahead and move on to the next topic.

Practice: Which of the labeled protons absorbs energy most upfield in the 1H NMR? 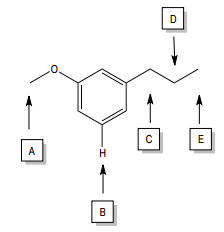 Practice: Which of the labeled hydrogens will be most de-shielded?

Practice: Which compound possesses a hydrogen with the highest chemical shift for its 1H NMR signal?