Alkanes are the backbone of organic molecules, yet they are almost completely unreactive.

The only reaction alkanes undergo is radical halogenation, the gateway to the rest of organic synthesis.

Concept #1: The one reaction that alkanes will actually undergo.

Back when I taught you guys about functional groups, I told you guys that alkanes actually don't count as a functional group even though they're superabundant. They're everywhere. The reason why I said that is because it's true. Functional group, that implies function, that they actually do something. And alkanes really don't react with much at all. Alkanes just come from underground. You dig them up in petroleum. That's what oil is. It's alkanes.
You can't really react with it a whole much. They're super stable. All you can do is blow them up. You can put them in your car and combust them, but you can't really react with them a whole lot.
They seem kind of worthless on first glance, but it turns out that there is one thing that they actually can undergo and that is that they can undergo a radical reaction because radicals are very high energy, so they're going to be able to react with something that's seemingly unreactive, which is alkanes. I want to show you guys the mechanism by which they do that.
As I just said, alkanes are the backbone of organic molecules, but they're almost completely unreactive. That's why they last for millions of years underground because they don't react with shit. But there is one thing that they can do in the presence of radicals and they can add halogens.
Here I have an unreactive hydrocarbon, like I said, that's from the dinosaurs. It didn't do anything that whole time. Now I bring it up to the science lab and I react it with a radical reaction and lo and behold, I get a halogen on that alkane.
Now what's cool about that is now I can do a bunch of other types of reactions to it. This is now called a functionalized hydrocarbon. Why? Because now I have a functional group, an alkyl halide. Once you have an alkyl halide, that's the gateway towards organic synthesis. Because now guess what? I can do a bunch of stuff to that. I can do substitution reactions, elimination reactions, addition reactions, all kinds of stuff because I first added that halogen.
What I'm going to show you right now is really the first step of all organic synthesis.

Alkanes will react with diatomic halogens in the presence of heat, light or any other radical initiator. 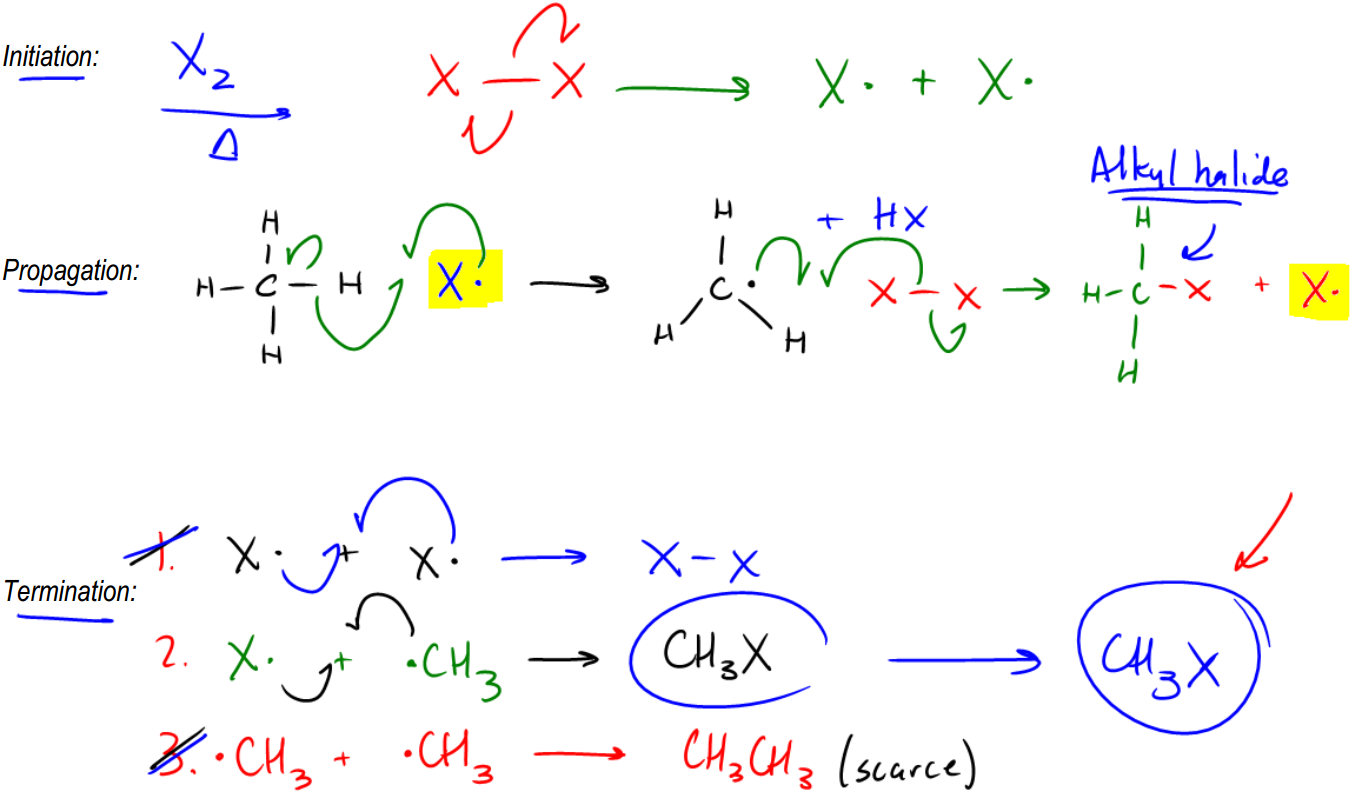 Now I want you guys to practice the general mechanism for radical halogenation all on your own and I want us to notice that this alkane that I'm reacting with has carbons of different stabilities, OK? I want you guys just to assume that we're going to react with the most stable carbon in this case so you're going to have to think back to what I talked about with radical stability to figure out which of those hydrogens to pull off in the radical halogenation, I think you guys I can get this though so I'm just going to let you guys loose all on your own trying to draw all three steps and then I'll give us the answer so go for it.

Example #2: Show the entire chain reaction mechanism for the following Radical Halogenation reaction, predicting which would be the structure of the major alkyl halide produced.