This is the #1 thing you need to know about cyclohexane. So let’s get right into it.

Concept #1: Axial or Equatorial: Which position is better?

We always want to draw our chairs with the largest groups equatorial. If they are axial, we need to flip the chair.

Example #1: Draw the following chair in the most stable conformation. 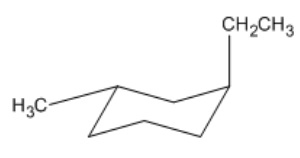 Don’t worry about drawing this problem out correctly on the first try, as long as you know how to flip it to the correct chair, that’s all that matters.

Practice: Draw the MOST STABLE conformation of cis-1-tert-butyl-4-methylcyclohexane.

Hint: If you don’t know what neopentyl is, it’s ok. Obviously it has 5 carbons, so keep that in mind when deciding equatorial preference!