The E1 mechanism is similar to E2 in that you get an elimination product, but the path to get there is completely different. It’s important that we understand how it’s different from E2.

Summary: A neutral nucleophile reacts with an inaccessible leaving group to produce elimination in two-steps. 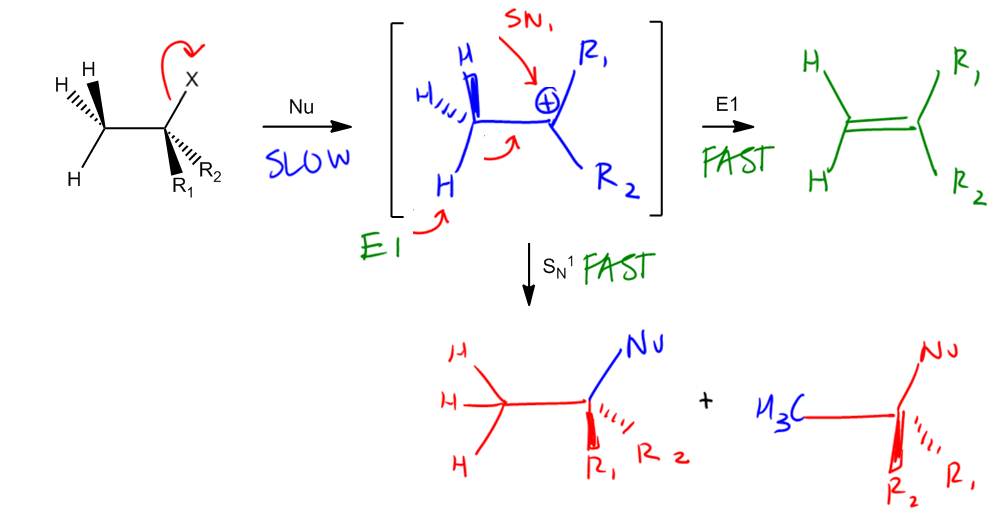 Concept #2: Understanding the properties of E1.

So now you guys know to expect SN1 and E1 at the same time. Let's just go ahead and fill out some really quick facts about this and I expect this part to be really easy for you guys because we've already done this for SN1.
It turns out that the 1 in E1 stands for the same thing. E1 stands for elimination unimolecular. That means that in terms of rate kinetics, everything is going to be very similar.
So do I want a strong or a weak? I want a weak because I don't want to do – I don't want the nucleophile to attack first. I want to make my leaving group. Is my leaving group substituted, highly substituted or unsubstituted? Highly substituted because this is going to make good carbocations. That's what I want. My reaction coordinate would be an intermediate, not a transition state because intermediates – carbocations are intermediates.
This would be a two-step reaction because I have a slow step and a fast step. What's my slow step? My slow step, just so you guys, know right here, that's my slow step. And then my fast step is once I've made that carbocation, I could either attack it directly with an SN1 or I could do a beta-elimination with an E1, but regardless both of those are fast steps because once a carbocation is made, it's very, very easy to attack it. Cool.
Then a little bit more. The rates, as I told you guys, would be unimolecular. What does that mean? Do you guys remember? It's the same thing that I made in SN1. What that means is that if I increase the amount of nucleophile, let's say I have ten times the amount of nucleophile, will that increase the rate of my reaction? No, because it's like I said with that analogy, where the factory makes carbocations one at a time and then there's like tons of boxes just laying around that someone's packing, like making boxes.
In order to ship the product, I don't need more boxes, I need more carbocations. If I were to double the amount of boxes that I have, I'm still not going to have more products to ship out. And it's the same thing with this, the only thing that changes the rate is how fast I can make carbocations, which that's going to be the leaving group, not the nucleophile. So that means that my rate is going to be just the leaving group.
Then finally, the stereochemistry is going to be – I'm just going to put here doesn't matter. Remember that – oops that's ugly. Remember that you had anti-coplanar for E2. Anti-coplanar does not apply for E1. Why? Because remember that for E2, my leaving group was still attached and then I had a beta-hydrogen. But in E1, guess where my leaving group is? It's out in solution. It already dissociated because remember you made a positive charge. And that positive charge it doesn't matter where it gets attacked from. It doesn't have any stereochemistry that it needs, so you don't worry about anti-coplanar. So if you want even to be more clear, let's put no anti-coplanar.
So I hope that makes sense to you guys now. Now you know that your mind is filled with a bunch of mechanisms so we're going to do some practice of this and then later on, obviously, I have to teach you guys when do you use which mechanism and that's going to be the whole purpose behind this awesome flow chart that I'm going to show you guys at the end of today's lesson.
So let's go ahead and move on to the next video.