See all sections
Learn
Next SectionPolysaccharide

What's up. Guys by now you should know quite a bit about monosaccharides but in this video I want to take a step further and define what a disaccharide is. So, let's get going with that. Guys a disaccharide is very simply going to be two monosaccharides that are linked by an O-glycosidic linkage in the middle. Remember, that O-glycosidic bond would just be at the anomeric posiition and oxygen attached to an R? Well, if you have that where the R group is actually a second sugar, that's called a disaccharide. Now, it doesn't matter whether it's an alpha linkage or a beta linkage, we'll get more into that in a little bit, that's just going to change the type of disaccharide it is but disaccharides exist in multiple different forms that are both alpha and beta, cool? So, guys the exact reaction that brings these two sugars together into one disaccharide is called condensation and guys the reason that we call it a condensation reaction is because back when we learn about the definition of condensation, what did it always mean, condensation always means that you take two molecules and you turn them into one bigger molecule with the release of water, you always have to release one water atom or one water molecule to count as a condensation and that's exactly what happens and the end product is that we form an acetal linkage, okay? Remember, we talked about acetals, I'm going to show you what the acetal looks like here, okay? Now, one thing that you guys should just keep in mind about disaccharide is that once you form a disaccharide those sugars are locked into position, so the typical type of mutarotation epimerization that might happen when you have a single sugar that cyclizes doesn't really happen anymore for disaccharides. So, what I'm trying to say here is that once you've formed your disaccharide it's kind of stuck in that position, it's not just going to go from alpha to beta and beta to alpha by itself okay, cool? So, let's just break down kind of each step of the reaction, let me explain this diagram to you. So, guys first of all we need two sugars. So, in this case I decided to bring two molecules of d-glucose together to form a disaccharide but guys I could have used pretty much any monosaccharides I wanted, this is just a very common example and it's a very easy example to look at but many different, the multiple forms are, multiple types of disaccharides exist using different types of sugars and using different types of linkages. So, here I'm just giving you an example. So, let's say that we wanted to form a beta 1-4 linkage between these two monosaccharides? Well, what would that even mean, why would we call it a beta 1-4? Well, guys first of all beta always stands for the first sugar and the relationship of the oxygen to the stereo descriptor carbons. So, remember guys that this would be my stereo descriptor over here, it's facing up and in this case this OH, because I'm using d-glucose this OH is also facing up so that means that these are cis to each other. So, this would be beta you guys remember that? Now, it doesn't have to look like this but this is just the one that we're using for right now okay? So, this is a beta d-glucose and notice that what I'm trying to do is I'm trying to form a linkage between the first carbon of my sugar 1 and the fourth carbon of sugar 2 and the way that we would count these guys is just like any cyclic sugar, we always count the anomeric position as 1 and then go around in a counter, in a clockwise way. So, then you would get 4 over here, does that make sense? So, if we were to bring these two alcohols together, the alcohol on one and the alcohol on 4, what we're going to get is the loss of water and the reason is because if you're trying to make an acetal linkage all you really need is one O, right? That means that, let's say, this is the O that stays, which is, okay? Actually that wouldn't be the O that stays, I'm sorry, So, let's say, this is the O that leaves, let's say this is the H that leaves and let's say this is the H that leaves, the O that stays is this one, right? This is the one and we can go through the mechanism later but that O will end up attaching to the carbon and notice that what we get as a by-product is one O and 2 H's leaving. So, we would get the condensation reaction and the release of one water molecule, okay? So, this condensation reaction would then link these two together and notice that what we would now get in terms of this linkage is we would get what we call a beta 1-4 because once again the linkage is going in the same direction of the stereo descriptor carbon and it's between carbon one is the first one and carbon four of the second one, okay?

Now, notice that two functional groups are present on this disaccharide, one we have an acetal, why do we call this an acetal because remember guys that the general formula for an acetal is that you have OR and OR connected to the same carbon and it's like a diether, is that a diether? absolutely, this is an acetal but notice that the anomeric position of the other sugar in this case is still exposed it still has an OH on it so that means that in this specific disaccharide I would have both an acetal functional group and a hemiacetal functional group present on the same molecule, this is going to be important later but for right now I'm just drawing your attention to it, okay? Now, last we have this name of cellubiose. So, you might be thinking, well, jhonny am I supposed to memorize that? maybe, it turns out that some professors and some textbooks and homeworks want you to know some, a few of the most important disaccharide you don't need to know all of them but you might need to know a few important ones, which I'm going to go ahead and talk about in a second but for right now what you should know or what you can just take, you take-home message from this, is that the disaccharide called cellobiose would specifically be the disaccharide that's formed from 2d glucose molecules making a beta one four linkage and if you were to change any part of that it would not be called cellubiose anymore, if you were to make it an alpha one four linkage, where now it's facing away from the stereo descriptor or if you were to change one of the glucose into a fructose, all of those changes would have massive impacts on the disaccharide, it would change the disaccharide completely and it would also change the name, okay? So, once again cellubiose is just the example that I'm giving for probably the easiest disaccharide to make, which is two d-glucose with a beta one four linkage, okay? So, in the next video what I'm going to do is, I'm going to talk more about important disaccharides that you might want to know 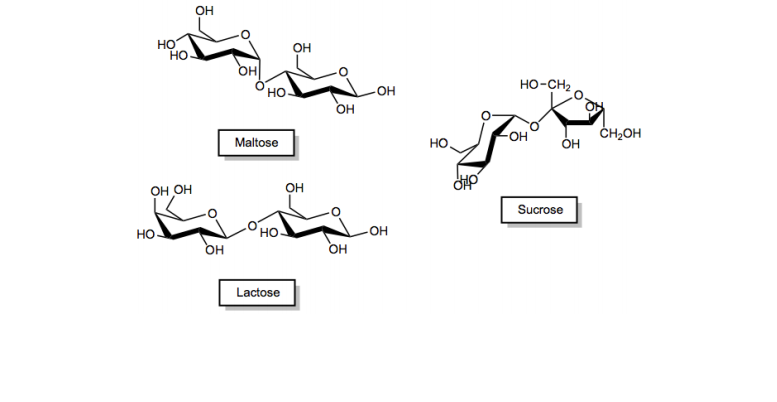 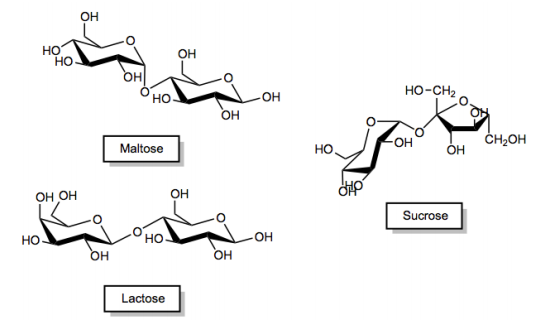 Practice: Draw a theoretical acid-catalyzed Fischer Glycosidation mechanism for the condensation of D-Glucose into cellubiose. (Note: This reaction would lead to very poor yields of cellubiose- can you hypothesize why?)