Lets say you want to get rid of a carboxylic acid. Is it possible? Yes, but under certain circumstances. Let's see when that is.

In this video, we're going to talk about an extremely important way to get rid of carboxylic acids and that's called decarboxylation.
Decarboxylation is going to be a very important reaction for the rest of Orgo. It's really important that you understand how to do it now. The way that it works is that a beta-carbonyl carboxylic acid can decarboxylate in the presence of heat. What this does is it produces CO2 gas as a byproduct. It evolves out of the material. Now what a beta-carbonyl carboxylic acid is, it’s just that you have some kind of carbonyl beta to your carboxylic acid. When you heat that up, what’s going to wind up happening is that you literally cleave the entire carboxylic acid off and it becomes CO2 gas, leaving only the carbonyl portion behind. Obviously we need to get to the mechanism for this because it doesn't really make sense just drawn like that.
Let’s do the mechanism. For this mechanism, it’s going to make a lot more sense if you do one thing, if you rotate the bonds. We’re going to rotate this bond up when I draw it because it’s going to make a lot more sense with the mechanism. I’m actually going to draw my OH facing like this and my carbonyl down. But this is still the same exact molecule. I just rotated it, and you should too. When I draw this mechanism, it’s actually a series of four arrows and there's right place to start, or no right place to end. It’s all concerted. But I like to start from the oxygen grabbing the H because that’s kind of an easy place to remember for me. I would start with the O grabbing this H. It’s going to start off like that. If I make a bond, I have to break a bond because H can’t have two. This single bond is going to give its electrons and become a pi bond between that carbon and that O. Now, that carbon has four bonds. Instead of breaking the bonds to the carbonyl though, I’m actually just going to break the single bond to the carbon completely. Notice what this is going to do is it’s going to release my C with two O’s on it because now there's no single bond connecting it to the alkyl group.
Finally, once I make that bond, I have to break this bond. There you go. Those are the four arrows. What we wind up getting, this is a heat-mediated reaction. I wind up getting something that looks like this. R with an OH with a double bond, and I’m going to get CO2. Now it makes sense why I get the CO2 gas. It should even make sense why the carboxylic acid is gone. What might be a little confusing for you is that I told you that you’d get a carbonyl from this, and right now I have an alcohol. That doesn't seem to make sense. This is something that we're going to talk about a lot more, if you haven't talked about it yet. But there's something special about vinyl alcohols. Does anyone remember? What’s special about vinyl alcohol? They undergo this completely separate special process called tautomerization. If you want more information on tautomerization, I have an entire video for that. There's an entire section of your textbook dedicated to tautomerization and enol chemistry. This is called an enol. Enol or enolate chemistry is a huge deal. You’re going to get there if you haven’t yet. But the whole point being that when you tautomerize, what you do is you switch the locations of double bond and a hydrogen. What this actually comes after tautomerization is this. This is the keto form. You wind up getting the ketone. Just take my word for it that it tautomerizes and then you’re fine.
Awesome. What I want you guys to do is for the next example, go ahead and predict what the product would look like. I know it’s a big complicated molecule. Predict it and then I’ll explain what's going on.

Alright, so before you say anything we're just going to draw the product and then we will discuss. So, that's the annoying part just drawing this whole thing, right? So, just bear with me, follow along, okay? We're getting close. So, I've got this chain and that's it, okay? Notice that when I decarboxylate I'm going to get rid of my carboxylic acid, okay? And, I'm going to need heat to do that. So, guys does anyone know what this molecule is? Okay, so this molecule is called tetrahydrocannabinolic acid, okay? Or THCA for short, this molecule is called tetrahydrocannabinol, I'm going to grow with that tattoo one time was awesome because it's those organic chemistry.

Alright guys, so what is this? THC is the active ingredient in marijuana, okay? So, this is the good stuff, right? So, it turns out that what we just did was a decarboxylation reaction that actually happens in real life, obviously not with you because it's illegal at least in my state it's illegal still, but where you are will see what state law says, tetrahydrocannabinolic acid decarboxylases at about 120 degrees to produce the active form of THC, THC a is an inactive form of the drug. So, in order for the drug that actually works actually do what it's supposed to do, it's going to need to decarboxylate first, which is why they actually smoke it, right? You smoke it to decarboxylate it to activate it, okay? So, anyway I just thought that was an interesting application, this is probably the most famous application of decarboxylation in the real world, but it happens all the time in all kinds of organic reactions. So, good for you to know, I know you're not going to forget it now. So, let's move on to the next video. 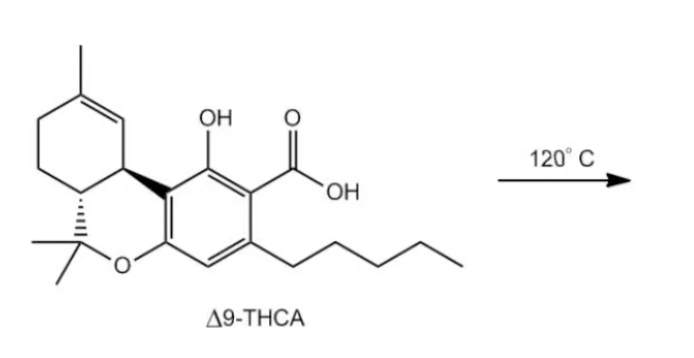 Practice: Provide the mechanism for the following reaction.

Practice: Which carbonyl group will undergo decarboxylation most readily? 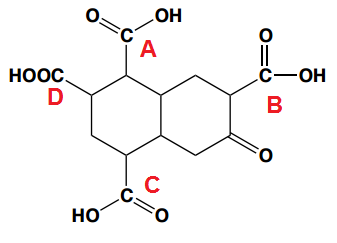