So first let's just try to recap what type of reaction this is, see how I'm starting off with a diene and a strong halo hydric acid HCL and I have a low temperature, I have a temperature of 0 degrees Celsius. So, immediately I should be thinking, I've got double bonds I've got HCL this should be hydrohalogenation but wait since I have two double bonds it needs to be conjugated hydrohalogenation, okay?

Awesome, the 0 degrees part means that it's not just going to be a mixture of products, right? I'm actually going to prefer the one, two product as my major, okay? So, I'm going to prefer, this is going to be a one two addition of HCL, okay? So, now here's another good question for you, how do I know which double bond is going to attack the HCL first? on my prior mechanisms I was always starting with the one on the right hand side, do you think it always has to be that one? nope, in this case guys it's not really going to matter because it's going to make the same product no matter what but in the case of having an asymmetrical diene you have to worry about lots of different products, okay? So, you could get this HCl, I mean this two bond attacking HCl but the other one could also attack, meaning that you have two different cations that are possible, we have a cation possible that would look like this in red, right? This is with a line there, but we also have the cation possible that looks like, oh my gosh I'm sorry guys, it was a mistake, it has to be a carbocation, I just looked like a fool, okay? So, you've got your two different carbo cations that are possible and notice that in both of these cases they're the same exact thing, that's the same molecule just flipped, but if this were an asymmetrical diene then you would have to draw both, okay? So, we said that we're going to favor a one, two product so that means that do I resonate this carbocation or just keep it where it is? I keep it exactly where it is. So, I'm going to take my CL, and I'm going to attach it to both and look what I'm going to get from my product, I'm going to get a product that looks like this CL or like this CL and notice that those are the same exact molecule just flipped around. So, I wouldn't actually draw both I would just cross one of them out and I would just keep one of these and this would be my answer, to have just the one two products, okay? I know it's a little bit cramped for space but that's what we would do. Alright, so again guys keep in mind that you, it's not really able, you're not able to predict which double bond in this case would attack, you have to draw the products of both, in this case they happen to be the same. Alright, so let's move on to the next one try to draw the whole mechanism for that one and predict how many products you would find.

Alright, so due to limited space I'm just going to go ahead and take myself out of the camera. So, we can use this whole area to write. Alright, so guys once again, we have HBR and a diene but notice that my temperature is different it's 50 degrees, meaning that I'm going to favor my 1, 4 product, okay? Now, once again, we can't really determine which double bond is going to attack in this case. So, I really have to draw both, I have to draw the fact that I would have a carbo-cation that looks like this and I would also have a carbo-cation that looks like this, it's a little bit Lone, sorry, it's off the screen a little bit, I think you can tell what I was trying to write, I'll try to make it a little higher next time, okay? So, now guys because I'm favoring the 1, 4 product I resonate this cation or should I just keep it where it is? I actually have to resonate it. So, we're going to resonate both of these to go to the other position because remember, we're favoring the 1, 4 product. So, I'm going to resonate this guy over here, okay? Now, even, this one even easier to tell them the last problem you can see how that carbocation is the exact same thing just flipped to the other side. So, I'm just going to go ahead and use one of these for the product, I'll just use the red one and I'll say that the final product is going to be this, BR, okay? And, that's my final product because I used 50 degrees Celsius, so this is a thermal dynamic controlled product, alright? Okay guys, so that's it for this part of the lesson. Now, I'm actually going to go into more detail on what it means for it to be kinetically controls and thermodynamically controlled but thankfully now you have the basics, you can predict the product no matter what. Now, I'm just going to explain a little bit more about theory. 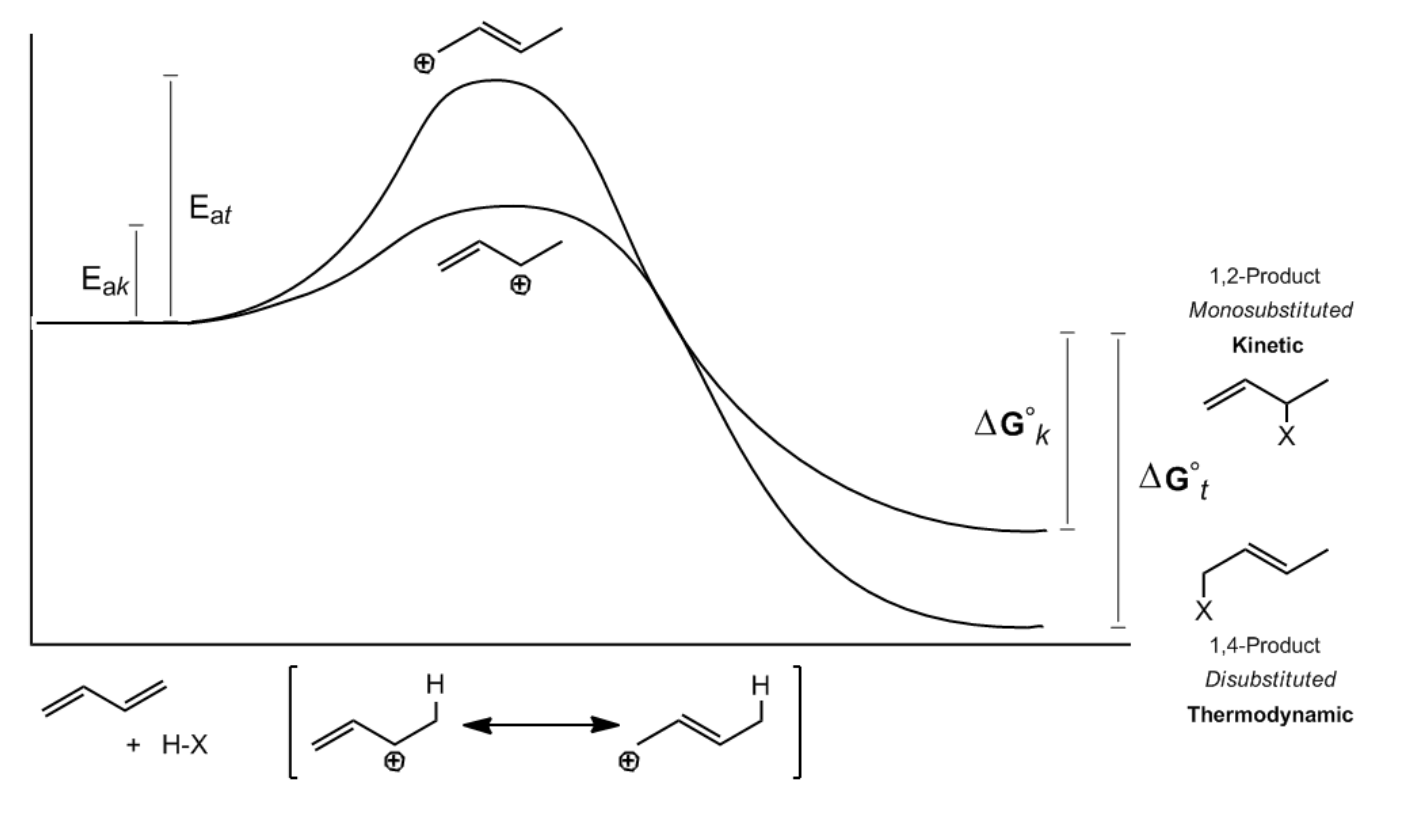 Videos in Conjugated Hydrohalogenation (1,2 vs 1,4 addition)