See all sections
GuideLearnAdditional Practice
Next SectionTest 1: Plane of Symmetry

Chiral is the chemistry term we use to describe objects whose mirror image is different from the original. 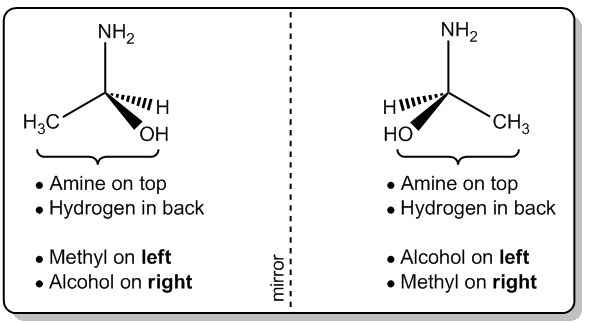 Concept #1: What is chirality?

One of the ways to see if two molecules are going to be related to each other as stereoisomers is to look for something that we call chirality. What is chirality? What chirality says is this, chirality says if you look into a mirror and you get a different image then the image of yourself, if you get a slightly different image, an opposite image, then that means you're going to be a chiral compound. That means that that image is going to be chiral and it's going to be different. What we call that image is called non-superimposable. Non-superimposable is a really confusing way of just saying a different image.
I can give you a few different examples. For example, I look at my face in the morning when I see my face in the mirror and I'm brushing teeth, it looks a lot like the face that I actually have. That's because there's a line of symmetry in my face, so when I get the image back, I see the same exact image. That would be something that is called achiral because the image is the same coming off of the mirror or at least it should be mostly the same as my face.
Another example of something that is different would be my hand. My hand, I put it up against the mirror, the image I get is the opposite image. That means that if I were to cut out the image that I see in the mirror and put it over my hand, I would get two opposite images. That's the idea behind chirality.
What chirality says is that if you get an opposite image when you look in the mirror, that is a chiral compound. Now the name for that different image, it has a really funky name that you guys are just going to have to know, and it's called an enantiomer. That can get really fun depending on what your professor's accent is like. But enantiomer just means it's the mirror image of a chiral compound.
So literally it could be anything. It doesn't have to be a molecule. It could be a person. It could be a car. It could be a cat. Whatever. An enantiomer is just the mirror image that's different.
So here let me show you guys an example with an actual molecule. Here's a molecule and what I want to show you is this fake mirror that I drew. It's just this dotted line here. Imagine that this molecule, like I said, maybe it's brushing its teeth in the morning and it's looking at itself in the mirror, so it has an eyeball. Obviously, this is just a really cool molecule. It has an eyeball and what does it see? What it sees is a lot of the image looks the same.
For example, what it sees is that the amine is towards the top. This is – let's say that's hair. So its hair is at the top. He thinks everything's good so far. And he also sees, for example, notice that I have some wedge and dash notation where a wedge has to do with something being in the front and dash has to do with something being in the back. That means if this is a 3D image the dash would be behind and the wedge would be up front.
What he sees is that the hydrogen is still in the back. Cool. So this one is still in the back. Right now everything looks fine. But then he notices something's weird. What he notices is that well, the OH used to be on the right side, but in the image that he's looking back the OH is actually on the left-hand side of himself. That's like his hand or something. His hand's on the other side of his body. Then same way with the methyl group. The methyl group used to be on the left, but now it's on the right.
I know this seems normal to you because you're thinking, “Oh yeah, this is a mirror so that means everything is going to be flipped, Johnny.” This shouldn't be new to you. This is just what happens when you look into a mirror. But that's all your professor wants you to know. What your professor wants you to know is that some molecules when they look in a mirror, they're going to get that opposite image.
What non-superimposable means is that if I were to take a cutout of this thing. I'm going to erase some stuff here so it becomes more clear. I erased the eyeball. Boo. When I take a cutout of this thing and lay it over this one, is it going to look exactly the same? And the answer is no because even though the NH2 would be in the same place, and even though the H would be in roughly the same place because they're both facing towards the back, what I would get is that I would get an OH over here and I would get a CH3 over here. What that means is that these are non-superimposable because my groups are in different places if I overlay them over each other.
It turns out that we have a pretty easy rule that we can follow to test to see if something's going to be chiral or not. This is not the only way to figure it out, but it's just a rule that I kind of already hinted at, which is this, if a molecule has an internal line of symmetry or anything, if anything has an internal line of symmetry, then it will have the same mirror image. And if you have the same mirror image, that's what we call achiral. That means it's not a chiral compound. 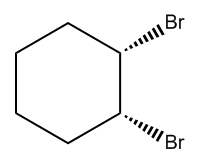 Example #1: Draw the mirror images of the following molecule. Determine if the mirror image is the same or different. If there is an internal line of symmetry, use a dotted line to indicate it on the original molecule.

Example #2: Draw the mirror images of the following molecules. Determine if the mirror image is the same or different. If there is an internal line of symmetry, use a dotted line to indicate it on the original molecule.

Using the Cahn, Ingold, Prelog priority system, assign and label priorities of each group attached to the stereocenter (1 through 4) in the box next to each group. Based on your assignments, determine the absolute configuration as R or S (circle R or S for each)

Using the Cahn, Ingold, Prelog priority system, assign and label priorities of each group attached to the stereocenter (1 through 4) in the box next to each group. Based on your assignments, determine the absolute configuration as R or S (circle R or S for each)

Indicate whether the following structures are chiral vs. achiral

Consider the following molecule:Using Cahn, Engold, Prelog priority system, assign priorities to each group, and based on yourassignment, label the stereocenter R or S.

All of the following objects are chiral EXCEPT:1) hand2) shoe3) DNA4) face

Which of the following molecules contain a chiral carbon?

Which of the following molecules contain a chiral carbon?

Indicate whether the following molecule is chiral or achiral. (i) chiral (ii) achiral (iii) cannot be determined