See all sections
Learn
Next SectionWhat is the Relationship Between Isomers?

Since these molecules come up often in exams, it’s a good idea to just memorize a few simple rules for them.

At the beginning of this lesson, I told you guys that there were going to be three tests for chirality. I've already taught you two of them, one was the internal line of symmetry, two was finding stereocenters and now I'm going to teach you the third one. It turns out that the third one is more of a shortcut than a new rule.
It turns out that this third test has to do only with disubstituted cycloalkanes. What are those? That just basically means a ring that has two identical things coming off of it. These happen to be really commonly tested molecules in homework and in exams. If we can figure out a way to figure these out even quicker, that's going to save us time in the long run, that's going to be smart. These are really just shortcuts. What that means is that for all of these, you could use the other two rules, but if we just memorize these shortcuts, it's just going to make it even faster for us when we see these. I want to go ahead and talk about them.
There's basically three different types of rings that we deal with on a regular basis. There's what I call gem-disubstituted. Gem is short for the word geminal. Later on, what we're going to learn about the word geminal is that it means two things coming off of the same carbon. If you ever see geminal disubstituted, that is always achiral. You don't have to give it a test. You don't need to look for a line of symmetry. Nothing. It's just always going to be achiral. The reason for that is that there's no chiral center. If you think about it, both of these R groups here are going to be exactly the same no matter what, so there's no chiral center, so this is always going to be achiral. Easy, right?
Then let's go off to the other extreme which is para-disubstituted. Now para is a word that we're going to use a lot more in orgo two and what it means is across from or opposite to. Wow, that just – my handwriting's getting worse and worse. Across from or opposite to. Basically, if you have two substituents that are perfectly across from each other, then that's also going to be achiral. This is also something that you can just memorize. You don't have to test it. You can just say if it's para-disubstituted, if they're across from each other perfectly, then it's also going to be achiral. I don't need to test anything.
Something to keep in mind that you have to be careful about is that this is only possible on even-numbered rings. The reason is because if you have a five-membered ring, there are no two positions that are perfectly across from each other. This one, ideally the position that would be across from it would be here, but there's no position there. So this is only possible on even-membered rings, like four-membered, six-membered, eight-membered, stuff like that. If you have five or seven, it's not going to work, or three, it's not going to work.
Cool. We've already knocked out two huge categories, gem-disubstituted, para-disubstituted. They're always achiral.
What about in between. In between, we're calling that middle disubstituted. That just means somewhere in the middle between gem and somewhere between para. Basically, somewhere in between zero degrees or 180 degrees, basically, if you're thinking of it as a circle.
For these, it's actually going to depend where the groups are facing. If the groups are facing cis, then the answers always going to be meso, achiral. I already showed you guys an example of one of these when we did the – when I showed you guys the meso compounds and I showed you how a ring could be a meso compound. If they're cis, it's going to be meso, achiral. If they are trans, then it's always going to be chiral. You don't have to test it, you don't have to do R or S, anything like that, just say it's going to be chiral for sure. 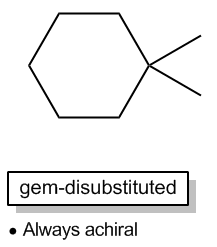 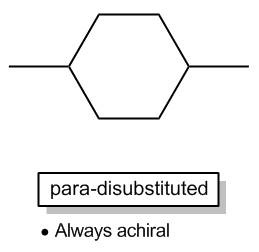 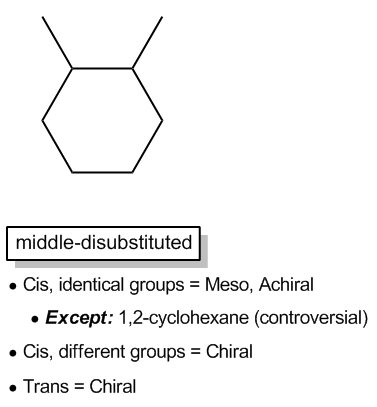 There is one exception, but there's like a huge disclaimer here that I have to give. What this is is that this happens to be controversial. I know that that's a really weird word to use for organic chemistry because organic chemistry is such an old science. How could there be controversy about this? Is this political? It's not like Republicans think one thing and Democrats think another. It's that some professors tend to be renegades and think their own things versus what the book says.
According to your book, this is actually achiral. According to your book, this exception here of 1,2-cyclohexane, which I'm going to draw for you, which is actually this right here. According to your book, this is achiral. So it would fit into this rule that we have right there about if it's cis-1,2,-cyclohexane, then it would be achiral. But according to some professors, it's actually chiral. I've seen that at the same university, two professors will say two different things. It really just depends how they're thinking and how they kind of grew up teaching organic chemistry.
Let me show you where the controversy lies so that you guys will understand. It turns out that remember that cyclohexane doesn't exist in a planar structure. It actually exists as a chair conformation. What that means is that I'm just going to draw cis-1,2,-cyclohexane. If I have two groups facing up like this, it looks like it has a plane of symmetry. It looks like it has a perfect plane of symmetry so this should be achiral. But it turns out that what it really looks like is a chair.
What that means is that if they're both facing cis and if they're 1,2 apart from each other, then that means that one of them will always be axial and one of them will always be equatorial. Remember how to figure this out? Basically, they both want to go to the same face of the ring and they both want to be cis and they have to be 1,2, so one of them is going to be axial and one of them is going to be equatorial. Is there a plane of symmetry now? Not really. If you draw it like this, there's no plane of symmetry because if you cut it down the middle, you're going to have two different positions.
The professors who say that it's chiral will go by this argument, will say it's chiral because the positions are different. Now the professors that say that it's achiral, which is actually the majority of professors, will point to the fact that this is in equilibrium. What that means is that, sure, one of the chairs is chiral by itself, but it doesn't just exist as one chair, it exists as an equilibrium of two chairs. What that means is that on average, you always have one axial and one equatorial and they kind of cancel out. The professors who say that it's achiral point to this equilibrium.
Now, what's your job? Your job is if your professor made a big deal out of this in class or even if maybe they never talked about it at all, maybe it would be safe to just go to their office hour and just say, “Hey prof, what do you think about 1,2-cis-cyclohexane? Is that chiral or is that achiral?” Because the last thing you want is for this to show up on your test and you don't know which one to pick because you don't know.
Just so you know, either argument is kind of defensible. You could defend that it's chiral, you could defend that it's achiral with these two different arguments. But just so you know, the majority and your book and the majority of people rest in the achiral argument. They say that because this is in equilibrium, then it's achiral overall, even through the structure by itself is chiral. But like I said, I wouldn't be pointing this out unless I had seen professors test the other way and actually say that it's chrial.
This is going to be kind of up to you guys to just do a little bit of homework with your professor and just say, “Hey, is this chiral or achiral?” and then they can let you know and then you memorize it that way. Are you guys cool with that? Long explanation. Sorry, but I just wanted to give you the heads up.
But other than that, if it's not that very special case, we're going to go with these rules right here, which is cis and trans, that's all you need to know. What I want you guys to do is for test three, I want you guys to answer these next four questions and then we'll go ahead and I'll answer them. So go for it.

Because cyclohexane has axial and equatorial positions, some professors will have different definitions of whether this is chiral or not.

Note: I’ve had an Organic Chemist from Yale argue with me that it was chiral. So just check with your prof! 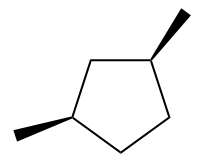 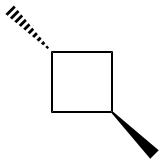