Ch. 6 - Thermodynamics and KineticsWorksheetSee all chapters

Now we’re going to discuss the most important intermediate of all organic chemistry, the carbocation.

Let's talk about intermediates. Remember that intermediates are high-energy compounds that can be isolated but exist at a higher energy state than the products or the reactants. That's the definition of an intermediate. It turns out that the most popular, the most widely used type of intermediate in this course is going to be the carbocation. What that means is I want to go more into depth on exactly what are the properties of carbocations because those are the most popular intermediates.
Remember that carbocations are just carbons that have three bonds instead of four, so they're always going to have a empty orbital. That empty orbital we give it a positive charge because it's missing a bond. And carbocations it turns out are going to be stabilized by something. There is something that can make that positive charge a little bit better. That's something called hyperconjugation.
What hyperconjugation says is that the electron density from neighboring sigma bonds, so adjacent sigma bonds, can share electron density with the carbocation, with that empty orbital. So if I have – the more sigma bonds I have close to it that are able to donate, the more stable my positive is going to be. Because of the fact that my positive is missing a ton of electrons, if I can share a little bit of these electrons into that positive charge, it's going to make it a lot more stable.
Basically, hyperconjugation is defined by the delocalization of charge of the interaction of an empty p orbital with an adjacent eclipsed sigma bond. It turns out that there's only one group that's really good at having eclipsed sigma bonds to p orbitals and that's R groups because R groups remember they always have hydrogens coming off of them. So those hydrogens are going to be able to eclipse with the p orbital. What that means is that the more substituted my carbocation, or the more R groups I have attached to it, the more stable.
So now I want to show you guys a chart of carbocation stability and show you guys the differences between what's a really bad carbocation and what's a good one.
A bad one would be all the way down here at primary. This would be called a primary carbocation because I only have one R group that's going to have H's that can donate electrons. Because remember an R group just means it's a carbon with some H's on it. That would be an example of a really, really bad carbocation because it only has one side donating electrons.
Now on the opposite end of the spectrum, a tertiary is awesome because a tertiary is going to have hydrogens here, here, and here. And they're all going to be able to donate electron density to that positive charge stabilizing it. So what that means is tertiary carbocations are always going to be your most stable no matter what.
Then in between, we have other ones like secondary and then these guys here. What are those? These are actually going to be ones that can resonate. This is called allylic. And this is benzylic. All these words mean is that – allylic just means next to a double bond so that's what this is. Benzylic means it's next to a benzene.
Remember when we talked about resonance structures way back that a positive charge next to a double bond could resonate and it would form another resonance structure that looked like this. That is a form of delocalization where now my positive charge isn't just stuck in one place, it can be distributed over several atoms so that's going to be more stable.
So allylic carbocations are more stable than secondary because secondary, it's good, it's better than primary because it has the ability to donate with hyperconjugation, but it doesn't have the resonance capability, so it's not as good as allylic. Same with benzylic. Benzylic is also better than secondary.
But the only thing is that tertiary is actually always going to be the best even if it can't resonate, that's fine. Because the tertiary one has so much hyperconjugation that that one's actually going to be more stable overall than even the benzylic or the allylic ones that can resonate. So you might just want to put here that these can resonate. But then this one just has – the tertiary's just the most stable overall.
Now I want to do this example. And I want you guys to think about this for a second and say which of the following alkyl halides would generate the most stable carbocation.
Now I am kind of asking you guys to think about an extra step, so I'm going to tell you what that extra step is. Just so you guys know. Maybe you've learned this already or not or maybe you remember it or you don't, but that's fine. Alkyl halide, which we're going to talk about more in a little bit, have the ability to leave. And if alkyl halides have the ability to leave the molecule completely that means that they're going to leave a carbocation behind.
What you need to do is think after this F leaves and becomes an F negative and I get a positive charge here, what kind of carbocation would that be. Do the same thing with all four of these and then figure out which of them is going to be the most stable carbocation. So go ahead and try to solve this question. Then I'll answer it.

Carbocations are stabilized by a phenomenon called hyperconjugation. 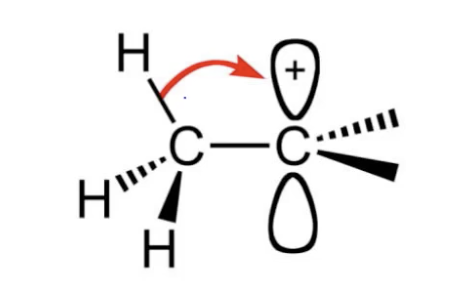 Hyperconjugation is the delocalization of charge by the interaction of an empty p-orbital with an adjacent, eclipsed σ-bond. Basically it’s like resonance for single bonds (more complicated than that but don’t worry about it).

Since this is only possible with -R groups, the more substituted the carbocation, the more stable.

Which of the following leaving groups would generate the most stable carbocation?

Example #1: Which of the following leaving groups would generate the most stable carbocation?