The presence of radicals in some familiar looking addition reactions can completely change the product.

Remember our friendly addition reaction halogenation? Notice that you achieve a vicinal dihalide in this reaction.

Now we see this reaction. Note that the only difference is the presence of a radical initiator.

This one added condition will lead to the formation of a mixture of allylic alkyl halides. Here’s the full mechanism: 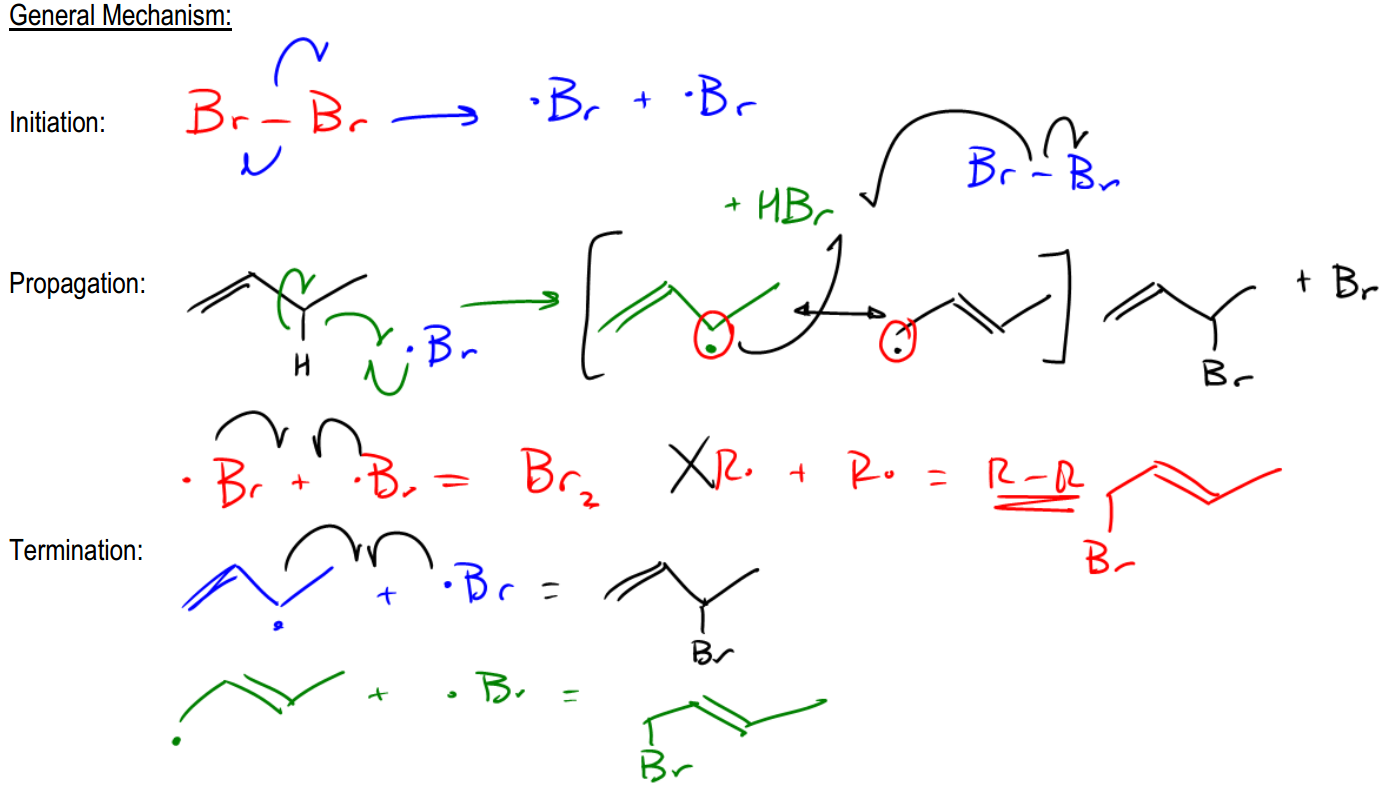 Concept #2: The products of Allylic Chlorination.

So now that we know the mechanism predicting these products is going to be easy the number one thing I'm looking for here that I want you guys to know is these reagents, so it happens to be that when you're doing a little chlorination 400 degrees Celsius is just the most common heat that's used so you should recognize that when you see CO2 400 hundred degrees and a double bond and you have Allylic position available we're going to wind up getting our you know we're going to wind up getting an allylic halogenation with multiple products because I could get the radical here or I could also resonate the radical to here, OK? So I'm going to one of getting both products one looks like this and one looks like this, OK? Easy stuff but you guys should be aware of that.

For Allylic Bromination usually you want low trace amounts of bromine we don't want too much bromine or we might wind up getting like an actual halogenation on the double bond which would be bad so we use NBS and we usually use NBS with a combination of light or heat doesn't matter but in this case, it would be the same exact thing, I would wind up getting a bromine here and I would get...Opps how do I change all this? There we go and I would get a bromine right here, OK? So really these are the same exact reaction just the reagent are a little tiny bit different that's it. Cool so what I want you guys to do is take this problem try to solve it yourself be sure to think about the whole mechanism before you predict your products I don't need the full mechanism as long as you can give me all the products that's what I'm looking for so go for it and then I'll solve it.

Predict the product(s) of the following reaction.

Example #1: Predict the product(s) of the following reaction.