An aldol reaction gets its name from the 2 functional groups that make it up. Let's take a look at how we can distinguish this condensation from others.

Practice: What product can be isolated from the following aldol condensation reaction? 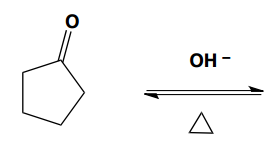 Practice: Provide the mechanism for the following transformation.