This is the first of three ways to add alcohol to a double bond. It is similar to hydrohalogenation in terms of mechanism, however it will require a protonation and deprotonation step since it is acid-catalyzed.

This reaction uses the same reagents as acid-catalyzed dehydration, so how do you know which reaction to use? Just look at what you are starting with: 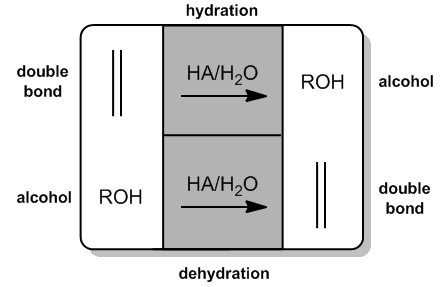 Note: The squiggly line on the product just means “indeterminate stereochemistry”. We aren’t sure where that –H will add, so we’ll just draw it on a squiggly line.

Example #1: A worked-example of the acid-catalyzed hydration mechanism.

Practice: Predict the product of the following reaction.